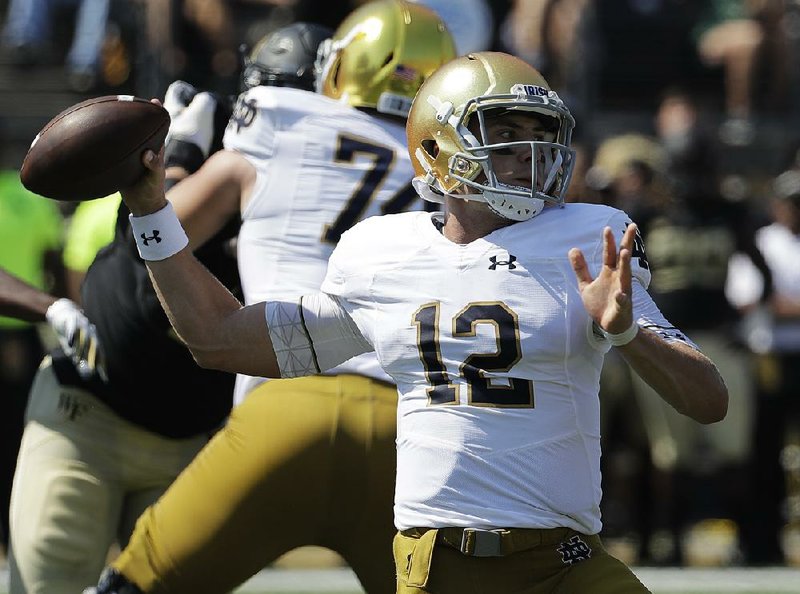 Ian Book started for Notre Dame in a 56-27 victory over Wake Forest last Saturday, but Notre Dame Coach Brian Kelly is non- committal as to whether Book or Brandon Wimbush will start in today’s game against Stanford.

SOUTH BEND, Ind. — Last year, Stanford made an in-season quarterback change, going to K.J. Costello late in the season to boost an offense that was relying too much on the running game and help the Cardinal surge to a Pac-12 title game appearance.

This season, Notre Dame has made a similar move. Fighting Irish Coach Brian Kelly did not wait as long as Cardinal Coach David Shaw to make the switch, and he also is still playing it coy about how committed he is to last week’s starter, Ian Book.

“We’ve prepared both quarterbacks and they are both ready to play,” Kelly said.

And Shaw says No. 7 Stanford will be ready for either Book or Brandon Wimbush tonight, when the Cardinal (4-0) face No. 8 Notre Dame (4-0) in the first top-10 matchup between the schools in 33 meetings.

Costello took over as Stanford’s No. 1 quarterback last November and his best performance down the stretch was against Notre Dame, throwing four touchdown passes and no interceptions in the regular-season finale victory.

Last Saturday at Oregon, Costello, the 6-foot-5, 215-pound junior, was 19 for 26 for 327 yards and three touchdowns in a wild comeback victory in overtime for the Cardinal.

“He’s gritty; he keeps playing and makes plays and gets his team back in the game,” Kelly said.

Costello has completed 64 percent of his passes (73 of 114) for 1,056 yards and 10 touchdowns against three interceptions. “He has made a lot of growth since last year,” Shaw said. “I believe there is a really high ceiling he’d like to reach, and we’d really love him to reach.”

Kelly started Book, a junior, last week after senior Brandon Wimbush was No. 1 for the Irish in the first three games of the season. Book threw for 325 yards and accounted for five touchdowns against Wake Forest. Wimbush, who started 12 games last season, did not play.

“I still anticipate seeing both quarterbacks,” Shaw said. “(Book’s) accurate and has a quick release. He’s athletic and can escape to get you first downs.”

Kelly loved the way Book distributed the football last Saturday with 15 backs and receivers getting at least one touch. But Thursday, Kelly wasn’t ready to say Book would start over Wimbush.

Stanford’s Bryce Love, the 2017 Heisman Trophy runner-up after rushing for 2,118 yards, has started the season slowly with 254 yards in three games.

Linebackers Drue Tranquill (33 tackles) and Te’von Coney (32 tackles) expect to see a lot more of Love, who has 287 yards on 46 career rushes against the Irish.

“He’s a dynamic playmaker for them, we all know that,” Tranquill said.

“He has a strong lower body and has great vision,” Coney added. “The key for us is to get to him behind the line of scrimmage.”

There’s Love on the Irish sideline, too, in junior cornerback Julian Love, one of the top players in the country at his position. Love’s next pass broken up will put him ahead of Clarence Ellis (1969-71) as the school’s all-time leader.