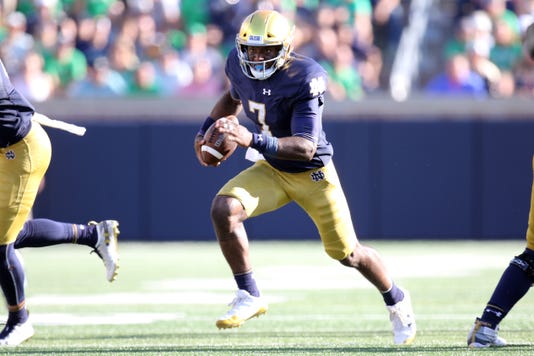 For those looking for black clouds in a 3-0 college football start, Notre Dame has plenty to choose from on offense.

How can a team aspire to be among the top four teams when it can’t even reach the top 100?

That is where the silver lining comes in. Personnel suggest the Irish can’t possibly be this bad.

“We think that we’ve got players that can make plays in the game,” coach Brian Kelly said Sunday. “But we go to practice on Tuesday excited that we’re only scratching the surface in terms of where we can be.

“You feel like you’ve got players that can make plays for you. We’re just not there yet.”

Final statistics from Saturday’s 22-17 victory over Vanderbilt, a 14-point underdog, were not unimpressive. No argument there. Progress? Yes.

In the first half, the Irish gained 247 yards, 163 by rushing, and had four scores. The third quarter was pathetic: 11 plays for 26 yards. Skip that.

The Irish scored their first fourth-quarter points of the season. If they had kicked the extra point (they went for two and missed) and converted the field goal on the next drive (it missed), victory would have been out of Vandy’s reach.

Point being: Notre Dame’s offense did nothing to hold leads in beating Michigan 24-17 and Ball State 24-16.

Kelly pointed to inexperience at all positions: wide receivers, running backs, offensive line. Consistency is needed from all, he said.

“I know the focus always goes back to the quarterback, but I think this offense really begins to click when all of the those pieces mature at the same time,” Kelly said.

The past two games demonstrate why Kelly retains confidence in Brandon Wimbush. The quarterback passed for nearly 300 yards (a career-high 297) against Ball State, and ran for nearly 100 yards (84) against Vanderbilt. There are few QBs in Power 5 conferences who can do something like that.

Kelly continues to bring in backup quarterback Ian Book, particularly near the goal line, explaining there are specific packages for Book. The coach said he does not believe Notre Dame is “disrupting” Wimbush by doing so.

“We think we can continue to use his assets,” Kelly said. “He was in the game in most of those red-zone situations.”

“We felt he was getting ready to be the kind of back that we had kind of been talking about, in the way he’s run: physical, kind of being who we thought he needed to be,” Kelly said of Jones.

Notre Dame was jumped by LSU and Stanford but remained No. 8 in coaches’ and Associated Press polls. Losses dropped Wisconsin and Auburn out of the Top 10.  The Irish are 26th in the Sagarin computer rankings. … Notre Dame is only a 6.5-point favorite in next Saturday’s game (noon, ABC) at Wake Forest (2-1). … Kelly said the Irish had no injuries that would prevent players from practicing this week. … CB Julian Love leads the nation in passes broken up (eight). … Tyler Newsome, who broke his own school record for single-game average with 59.6 on five punts, is fourth in the nation in punting average (47.1).