ARLINGTON, Texas (AP) — Notre Dame missed out on a big early game-turning play by the very nose of the football. The Fighting Irish defense missed having All-America cornerback Julian Love on the field for much of the Cotton Bowl.

When the third-ranked Irish needed just about everything to go perfect, their national championship drought instead stretched to three decades after another big postseason loss.

No. 2 Clemson took control when freshman quarterback Trevor Lawrence threw three touchdowns in the second quarter, two of them to receivers covered by Love’s backup , Donte Vaughn, and the Tigers went on to a 30-3 victory Saturday in the national semifinal game.

Notre Dame (12-1), which won its last national title in 1988, has lost eight consecutive times when playing in bowls that make up the New Year’s Six games — or the former BCS national championship. All but one of those has been by double digits, including a four-touchdown loss to Alabama in the title game nearly six years ago.

The Fighting Irish were in their eighth Cotton Bowl — they have played in no other game more often. That was also where they got their last major bowl victory, with wins over Texas A&M to cap the 1992 and 1993 seasons. 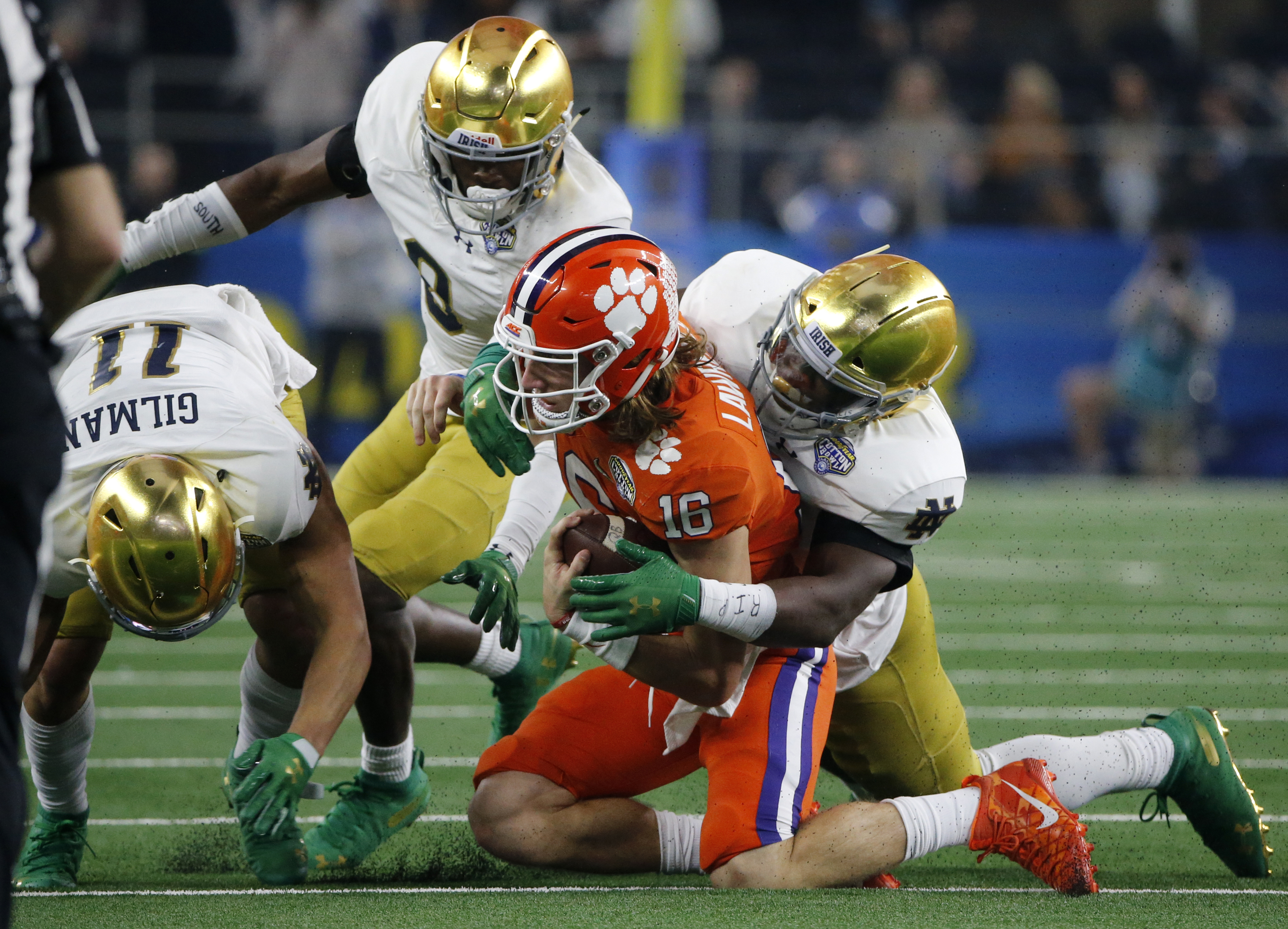 Notre Dame had allowed only five plays of 40 yards or more during its 12-0 regular season. Clemson had three such plays for touchdowns. 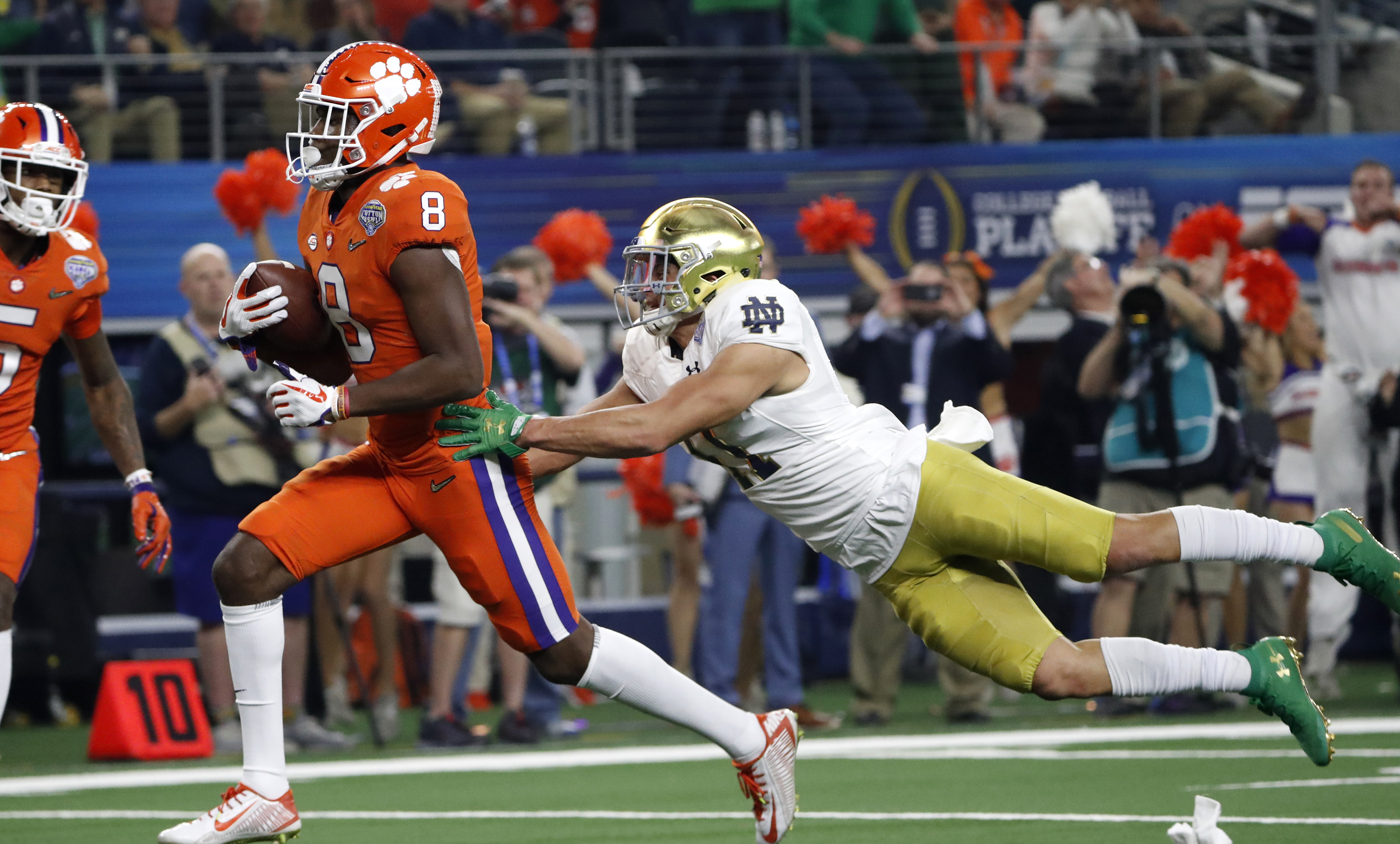 After Notre Dame tied it at 3 on Justin Yoon’s 28-yard field goal with 4 1/2 minutes left in the first quarter, the Fighting Irish looked to have recovered the ball inside the 10 after an apparent fumble on the ensuing kickoff return. 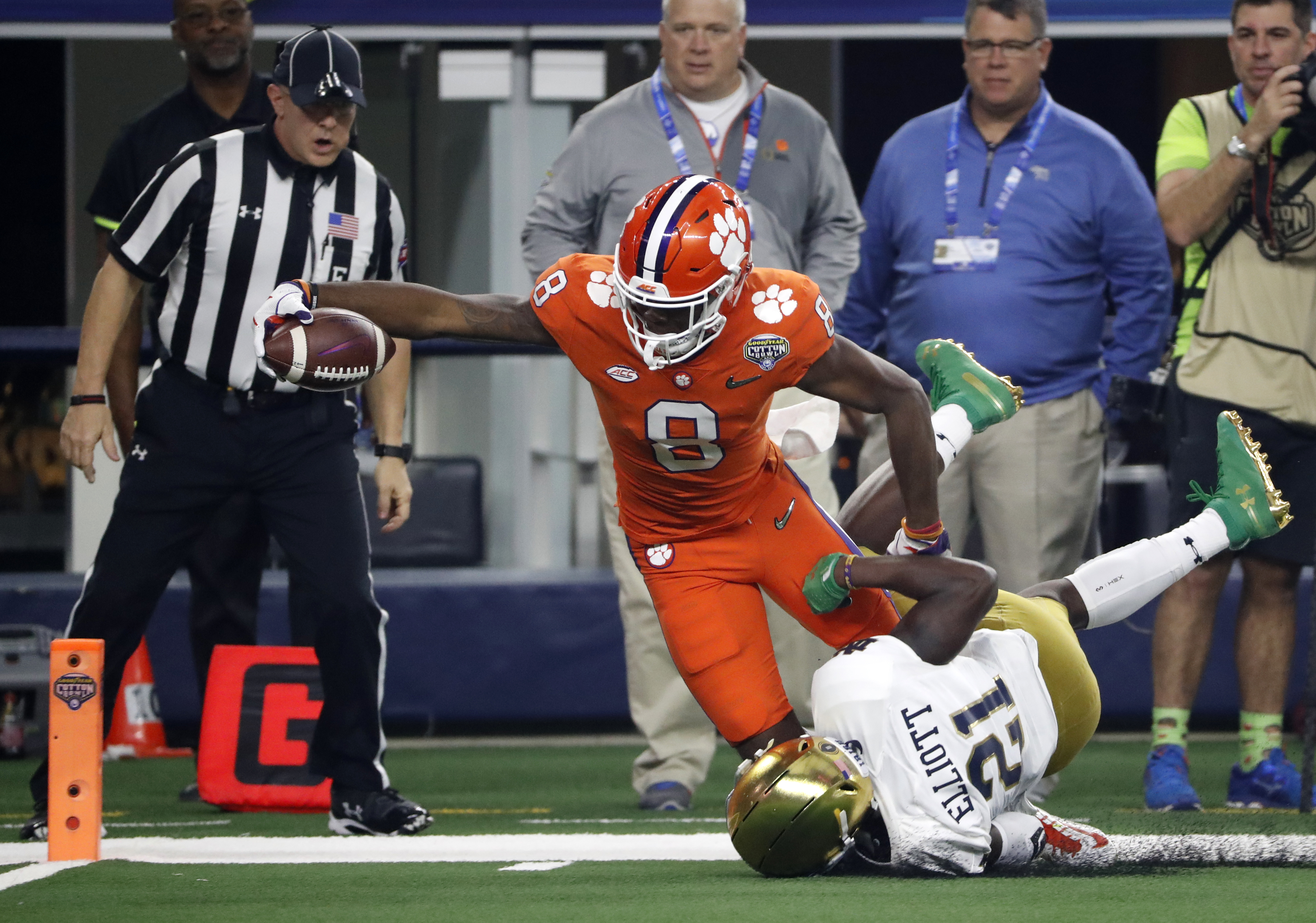 Cole Kmet stripped the ball out near the sideline when tackling returner Derion Kendrick, who frantically swatted at the ball when trying to get it. A lengthy replay review determined that the nose of the ball barely touched out of bounds, just beyond Kendrick’s reach, before ricocheting back toward the field where Irish receiver Chase Claypool made the recovery. With Love on the sideline — and it wasn’t immediately clear why the All-American wasn’t in the game at that time — Lawrence threw a 52-yard touchdown to fellow freshman Justyn Ross, who shed Vaughn near the 20 and got into the end zone after getting by another defender. 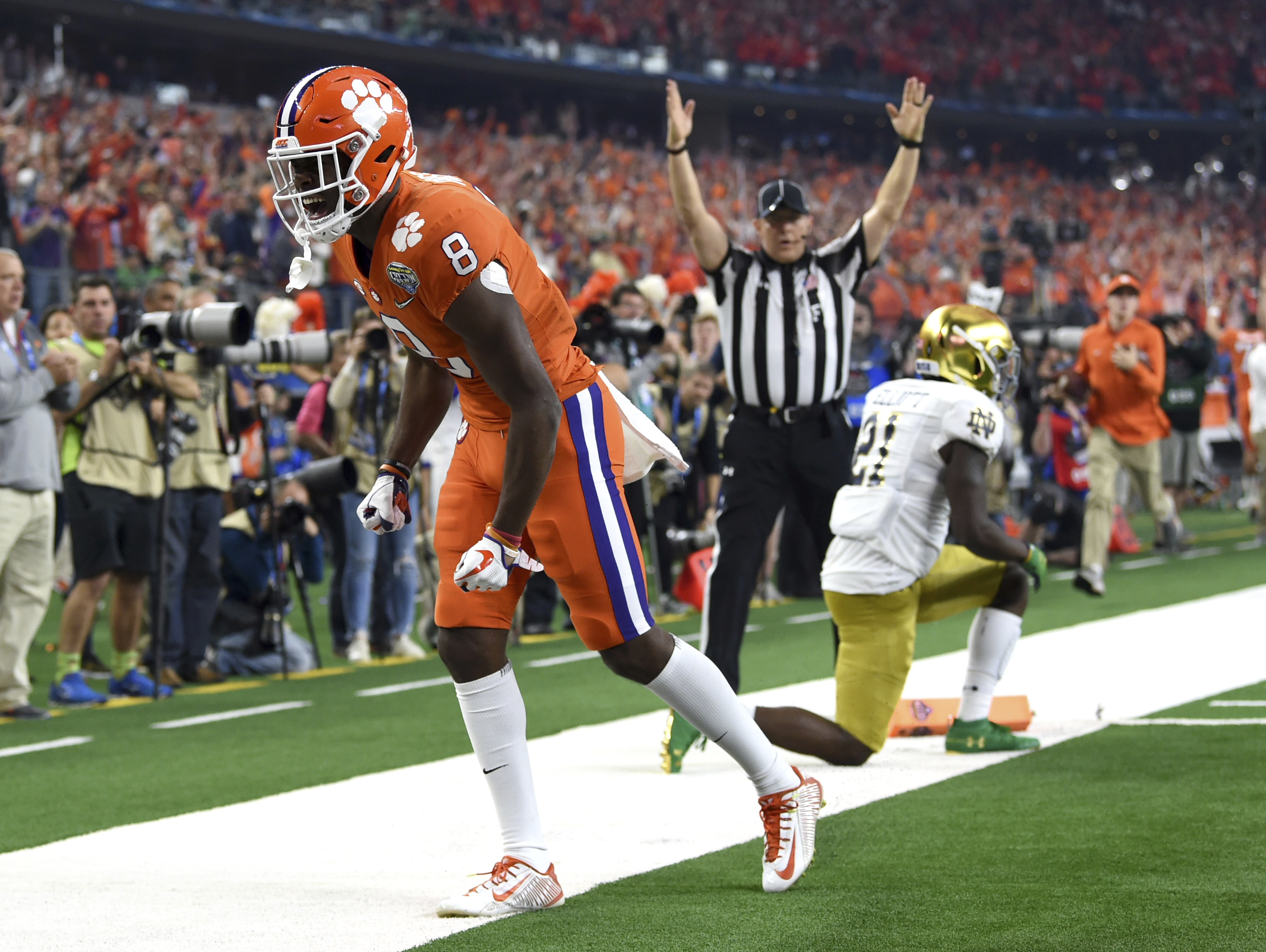 Lawrence threw two TD passes in the final 1:44 of the first half, including a 19-yarder to Tee Higgins, who made an impressive one-handed grab in the back of the end zone with two seconds left after the a deflection by Vaughn with his back to the ball. 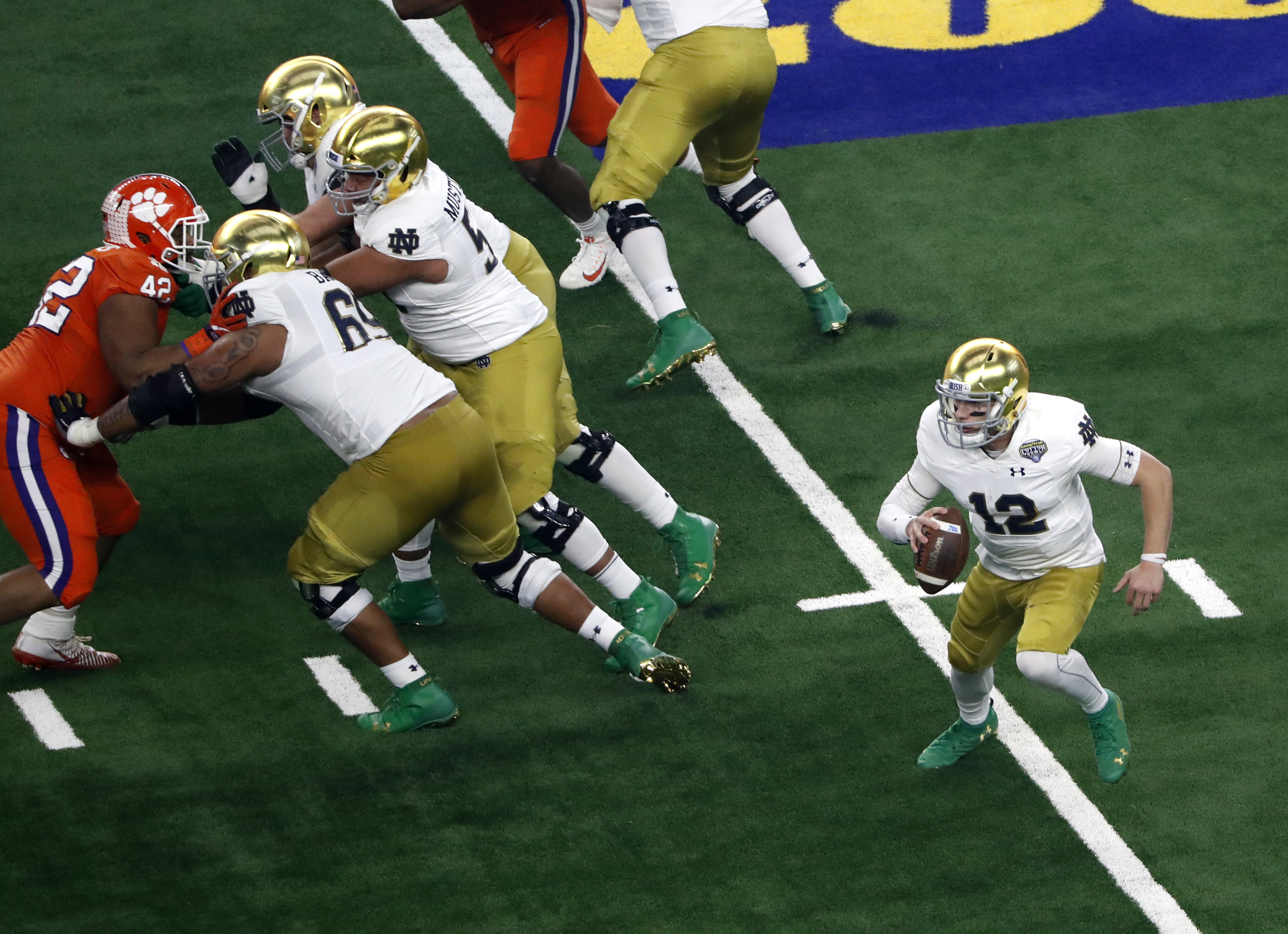 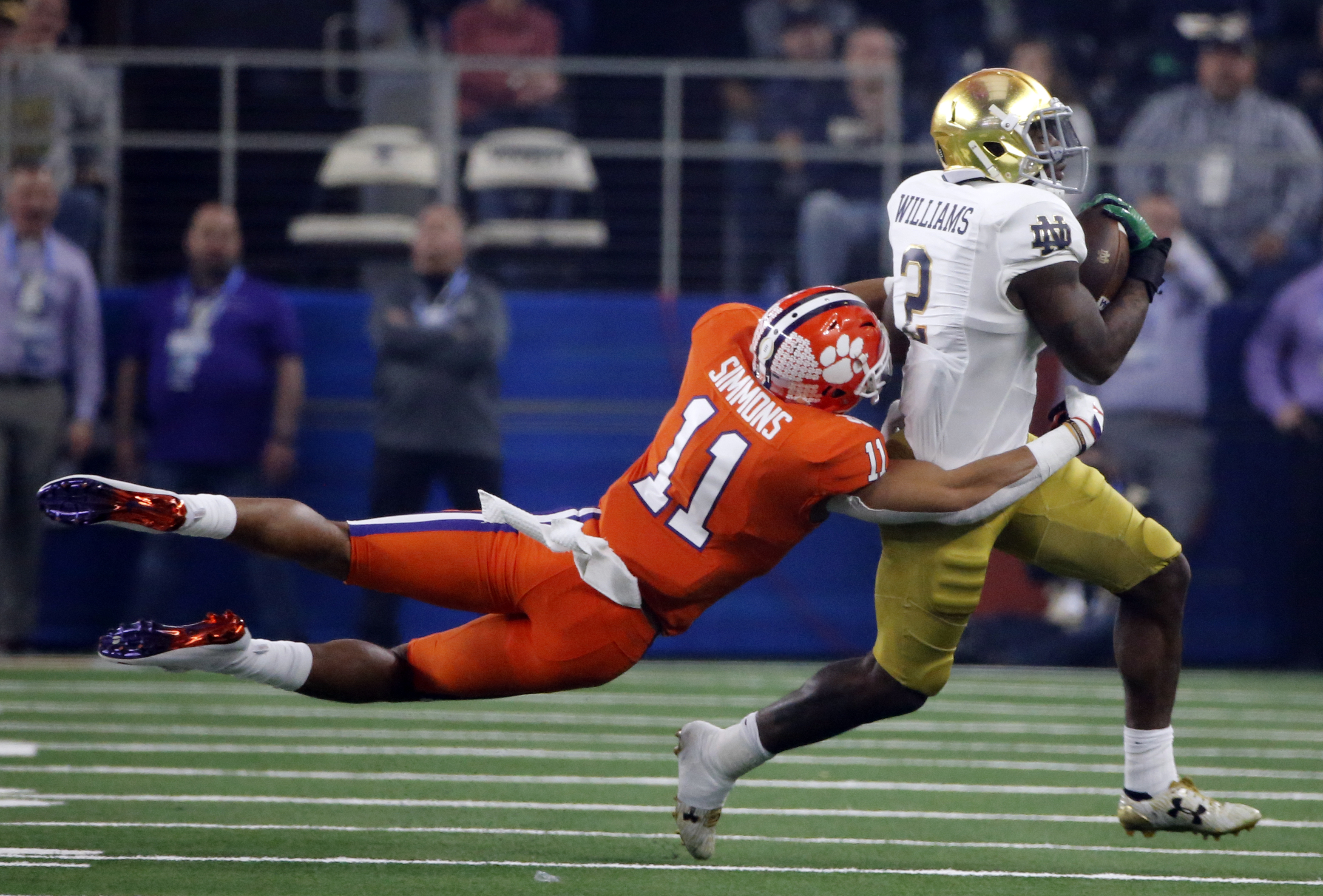 Ian Book, who took over as the Irish starting quarterback in the fourth week of the season, was 17-of-34 passing for 160 yards with an interception while being sacked six times. He also had a fumble that led to Clemson’s field goal in the first quarter. 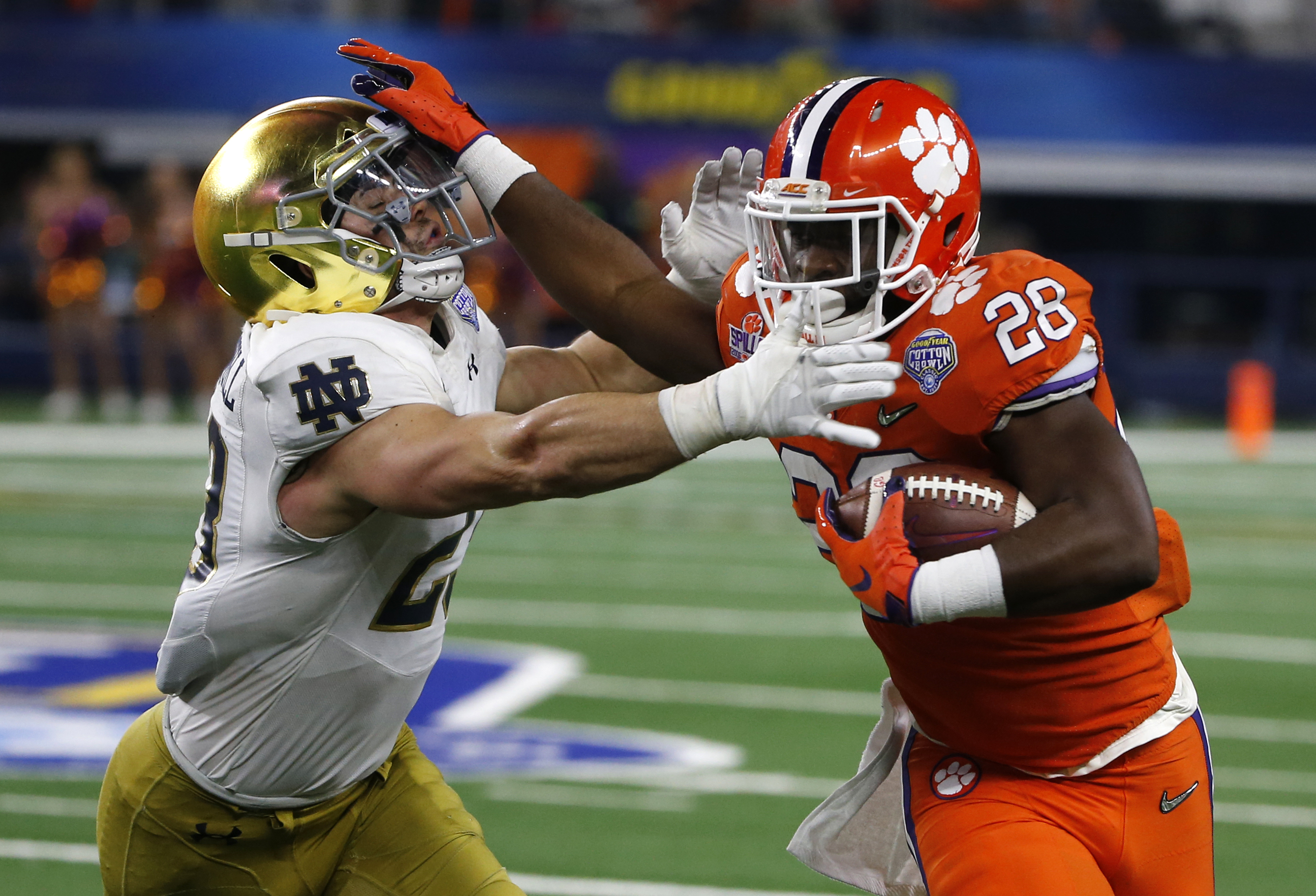