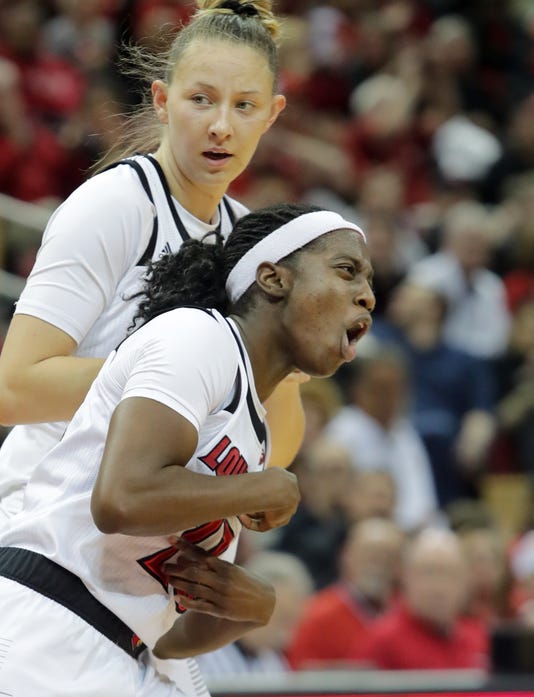 Louisville’s Jazmine Jones celebrates as she get back on defense with Kylee Shook. Jan. 3, 2019 (Photo: Scott UtterbackCourier Journal )

The Louisville women’s basketball team did it last year.

The Cardinals finally knocked off Notre Dame, finally took down Muffet McGraw’s ACC juggernaut, finally snapped a four-year run of dominance in the conference by tying for first and winning the tiebreaker.

They seemed to one-up the Fighting Irish — but not quite.

Louisville rolled in January, 100-67. Louisville won again in March, 74-72. But in April it was Notre Dame hoisting the national championship trophy.

Read this: How Louisville women’s basketball stacks up against Notre Dame

The momentum didn’t last. So when Jeff Walz and his team go back to South Bend, Indiana for Thursday’s game between No. 1 Notre Dame and No. 2 Louisville, they’ll have the proper perspective.

“If we can get beat by 30 and end up having a chance to win a national championship like Notre Dame did, I’ll take that,” Walz said. “I’ll be happy to go up there and lose by 33 if we’re able to reverse the script. I don’t think Muffet said, ‘Hey, oh my gosh, we have to quit. It’s one game. It was the biggest game of the year going into it, so now our year’s over.’”

Louisville and Notre Dame are so strong again that such a change of fortune isn’t inconceivable. No matter what happens Thursday, both will likely play for the ACC Tournament title in March, and both could be No. 1 seeds in the NCAA Tournament in April. We could see the Louisville-Notre Dame rematch that we almost saw in the national championship game last season.

That, for Louisville’s players, would be satisfactory. Fifth-year senior Arica Carter said Wednesday that she debated whether to watch Notre Dame play Mississippi State for the title. Junior Jazmine Jones said at the team’s media day in November that she saw part of that game. But it was painful.

“The championship was literally right there for us to reach and grab, and we just couldn’t hold on to it,” Jones said.

Jeff Walz: ‘Who wants to come to a women’s game and watch a 49-46 game? I don’t and I coach it.’
Matt Stone, Louisville Courier Journal

This team, in which all five starters were regulars on last year’s team, wears that mentality. The blowout of Notre Dame last season may have been the biggest regular-season win in Louisville history. Everything worked. Asia Durr scored 36 points. Myisha Hines-Allen scored 31.

The Cards led 33-16 after one quarter, 56-28 at halftime and 85-46 after three. They poured it on in buckets as a packed crowd roared. It was a dream night. But it won’t influence Thursday’s game.

“That night was so magical, I don’t think it’s ever going to happen again,” Carter said. “So we just prepare and focus because I hope nobody on our team is expecting for our game to go like that again.”

The teams may be different, but not by much. Both return four starters from last year’s team. Louisville is 14-0. Notre Dame is 13-1, its only loss coming against Connecticut.

The Irish have been slightly more impressive in victory, with a margin of 25.9 per game to Louisville’s 20.8. They have played five teams ranked in this week’s coaches poll and beaten four by double digits. The Cards have played two, beating Arizona State by two and Kentucky by five.

But the Cards know what it takes to take down the ACC’s top-ranked team. And the fact that the win won’t last into March does not make it any less desirable. There is still the history, after all. Carter said she watched Notre Dame win last year’s championship and thought, “That should be us.”