Notre Dame football in 2018: Can the Irish win big in CFP era?

This story appears in the Oct. 22–29, 2018, issue of Sports Illustrated. For more great storytelling and in-depth analysis, subscribe to the magazine—and get up to 94% off the cover price. Click here for more.

If you haven’t visited South Bend since Notre Dame last won a national championship, it may seem the same at first. In the fall, whether you’re driving southeast from Chicago or north from Indianapolis, trees are full of color, pastures are lush, and John Deere tractors are shuffling along the open fields. But enter town, and you’ll see how much has changed since 1988.

The tallest building on Main Street, for years a dilapidated high-rise, is now a swanky hotel. Farther down the road, the old Studebaker automobile manufacturing plant that has stood since the 1920s is being turned into a tech hub. It looms over Four Winds Field, home of the Class A Cubs, which got a makeover in 2012, and is millennial-approved, just like the keto coffee shop and barre studio just off campus. And the whole town is run by 36-year-old mayor Pete Buttigieg, whom locals credit with turning around the Rust Belt city.

Notre Dame Stadium has changed too. When Jack Swarbrick became Notre Dame’s athletic director in 2008, he discovered that the department was behind other elite programs and their sparkling facilities. He spearheaded Campus Crossroads, a $400 million project to renovate the 88-year-old stadium, which sits near a new 111,400-square-foot, $50 million indoor practice facility under construction. The football has changed, too. Brian Kelly is Notre Dame’s fifth coach since Lou Holtz, who left after 1996, and the team has changed schemes as often as it has changed staffs. Kelly’s predecessor, Charlie Weis, ran a pro-style offense, for example, while Kelly has continually shape-shifted his offenses to fit his personnel.

One thing that hasn’t changed in South Bend though is this: the mystique. The campus, with its Gothic architecture and adherence to ritual—there are still 100 weekly Masses on campus—feels untouched by time. At football games, ushers—a group started by Knute Rockne—still wear navy blazers, white dress shirts, gold ties and khaki pants and greet fans with an emphatic “Welcome to Notre Dame.” Players still slap the PLAY LIKE A CHAMPION sign when they leave the locker room and head to the field. Just north of the stadium, the Golden Dome glistens just as brightly as it did more than a century ago when it was christened. Says Roger Valdiserri, who was sports information director from 1966 to ’88 and a close friend of legendary coach Ara Parseghian, who died in 2017, “We still have the glamour.”

The Notre Dame Way—tradition, ritual, aura—remains strong. And this season, the Irish are off to a 7–0 start and in position for a run at a national title. But given that the storied program is mired in the longest championship drought in nearly a century; that it played for the national title just once in the BCS era; that it has yet to even make a College Football Playoff; and that its hopes for an undefeated season barely survived with a rocky 19–14 victory over Pitt on Oct. 13, it’s time to ask: Is the Notre Dame Way still working? 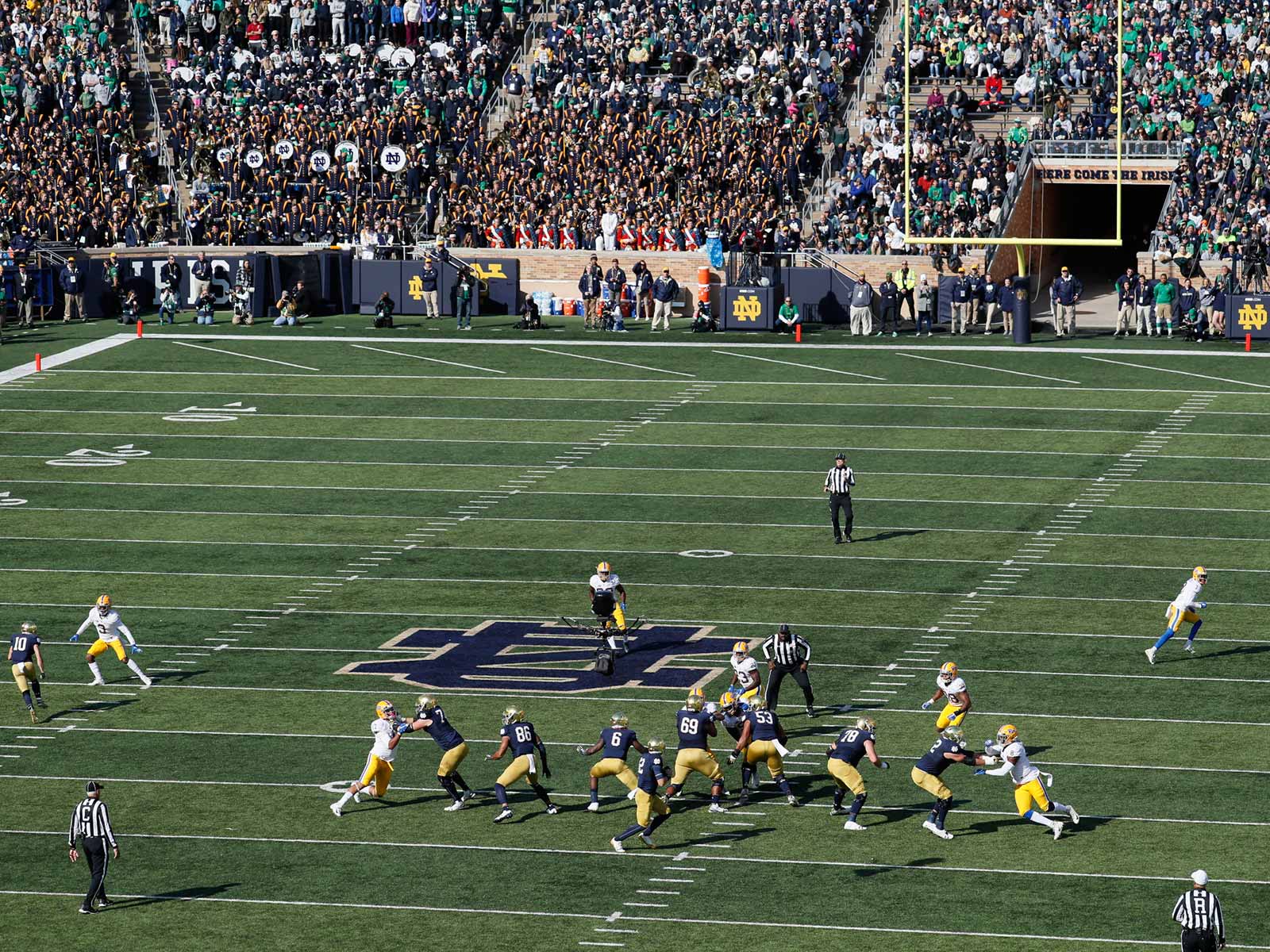 The truth, of course, is that beneath the golden dome, not all is untarnished. In August 2010, Kelly’s first season in South Bend, Lizzy Seeberg, a freshman at neighboring Saint Mary’s College, reported to campus police that she had been sexually assaulted by a football player. Seeberg, then a 19-year-old who battled depression and an anxiety disorder, killed herself days after filing the report. At the 2014 NFL combine, linebacker Prince Shembo, who was investigated for the assault but never charged, said Kelly had “told me I couldn’t talk about it.”

In October 2010, 20-year-old Declan Sullivan, a student manager, died when he fell from a 40-foot aerial lift from which he was filming football practice. Winds had reached 53 miles an hour that afternoon. Notre Dame conducted an investigation and found that the university had made mistakes in holding practice outside that day.

In 2016, the NCAA ordered Notre Dame to vacate all 21 total wins from ’12—when the Irish last appeared in the national title game (losing to Alabama 42–14)—and ’13 after a student-trainer was found to have completed coursework for two players and provided impermissible academic benefits to six others. The NCAA denied Notre Dame’s appeal of those sanctions earlier this year.

Fan dissatisfaction has grown in recent seasons. Two years ago, following a 4–8 season, Notre Dame’s worst since 2007, a group of fans and alumni placed ads in the The Observer, the student newspaper, calling for coaching changes within the football program. Kelly accepted the blame, overhauled the staff with seven new coaches, and the result was a 10–3 season in ’17 that appeased the fans. This offseason, the Irish signed a top-10 recruiting class.

Notre Dame has refused to do one thing that would undeniably improve its chances to play for a national championship. By remaining an independent in football in the playoff era, the Irish have kept themselves at a disadvantage. Notre Dame has always relished its independence, which was born on Nov. 1, 1913, when Jesse Harper, the university’s first athletic director, became the first to schedule nationally. Notre Dame had been shunned by the Western Conference (forerunner to the Big Ten) because it was too small (and too Catholic), so Harper sent the Irish around the country, most significantly to West Point to play mighty Army, where the Irish popularized the forward pass. Notre Dame shocked the Cadets and the nation with a 35–13 victory and went 7–0 on the year, with victories over Penn State and Texas too, and the school became popular and relevant.

The Irish have since become members of the Atlantic Coast Conference in all but two sports: They’re in the Big Ten in men’s hockey and independent in football. Swarbrick says “at least four” conferences wanted Irish football to join them and while there were “tons of discussions” over his first five years on the job, no one is currently calling. Rather than be tied up with conference games, the current schedule leaves room for matchups against teams from the SEC or the Big Ten, in NFL stadiums, and even in Dublin, and it allows Notre Dame to strike its own deals like the one it has with NBC, which is worth $15 million a year and runs through 2025. “When Jesse [Harper] handed the reins over to Knute Rockne, Knute always reported that Jesse said to him: ‘Take the team to the largest venues in the country because you want the world to know who Notre Dame is,’” says Swarbrick.

The world undoubtedly knows Notre Dame, but it also knows Notre Dame, which has made playoff pushes before (it was ranked as high as No. 3 in the playoff rankings just last season), is a team that perennially falls short. The Irish have finished in the top 10 just three times since 1993. Now, their independent status has become a clear disadvantage in pursuit of consensus national championship No. 12. Notre Dame now begins every fall knowing that one regular-season loss and a dip in strength of schedule might doom its title chances.

The school says it continues to maintain tough admissions standards and a rigorous academic schedule. Coaches in all sports must give up control of student discipline—drug testing, for example, isn’t administered through the athletic department as it is at many other schools. Student-athletes must live on campus for three years. “It makes it tougher to win this way especially in a day and age where you see so much more talent spread over so many more different places,” says Mike Golic Jr., a guard on the 2012 team. “I think it’s still possible, but it’s now very, very difficult.”

No team is under more pressure to win the remainder of its regular-season games than Notre Dame. Irish fans know this is the team’s best opportunity to win out since 2012. The team has already notched three wins over Top 25 teams (home victories over Michigan and Stanford, and at Virginia Tech—only Kelly’s fourth road win in 14 tries against a Top 25 opponent). The Irish’s start doesn’t happen without Kelly switching his starting quarterback from senior Brandon Wimbush to Ian Book, who has opened up the offense. The defense is run by first-year coordinator Clark Lea and led by lineman Jerry Tillery and linebackers Drue Tranquill and Te’von Coney—all of whom passed on the NFL draft and returned to school. The Irish have relied on an especially adept pass rush that was on display to close out that 19–14 win over Pitt. Book’s fourth-quarter TD pass to Miles Boykin gave Notre Dame the lead before a sack helped seal the game.

Now, the Irish have no ranked teams remaining on their schedule. Their most difficult games appear to be road matchups at Northwestern and USC. The drama in South Bend has the potential to become the biggest story line of college football’s second half and add some suspense to a season in which preseason favorites Alabama and Clemson have not faltered.

“They’ll always be relevant,” Brent Musburger, the longtime college football play-by-play man now with the Vegas Stats and Information Network, says of the Irish. “People are always interested in what the Notre Dame spread is, and that’s not going to change. [But] it’s undeniable that the conversation is better when an iconic program like this one is winning.”

If the Irish are selected for the playoff, at least two Power 5 conferences will be left out. Last year, the SEC sent two teams to the playoff—conference champion Georgia and Alabama, despite an Iron Bowl loss to Auburn—and the Pac 12 and the Big Ten were both excluded. If Notre Dame slips up over the next five games, some Power 5 teams may be pleased, but the heat on Kelly and Swarbrick will be intense. The Irish’s failure would be more evidence to some that the football program is simply not built to win championships in the playoff era.

With all those dynamics at play, the 2018 season is shaping up to be a referendum on the Notre Dame Way. “There’s such a firm belief that we can’t accomplish that,” Swarbrick says of a playoff berth and a national championship. “To be able to rebut that presumption, it would be such a great feeling and so great for our coaches and students.”

Is the Notre Dame Way still working? This could be the year we find out.

No. 1 Notre Dame women rally past No. 9 Oregon State, 91-81 – Atlantic Coast Conference
Which school has the most Heisman Trophy winners?