Jack Swarbrick put his arm around Brian Kelly and they walked together in the rain outside the losing locker room at the Los Angeles Coliseum. Notre Dame had just suffered its eighth loss of the 2016 season, a 45–27 thumping from rival USC, and rumors were swirling about Kelly’s status as head coach. Would he be fired following a 4–8 debacle? Was he seeking coaching options outside of Notre Dame? Anything seemed possible.

During a critical time marked by uncertainty and outside noise, a small, humanizing moment sent a message of solidarity to those who saw it.

“It was sort of, O.K., let’s fix this,” Swarbrick says looking back.

Swarbrick can always be seen walking off the field or court with his coach following a loss (if he’s at the game) because he never wants them to do it alone. Two years ago, Swarbrick and Kelly took many treks together. After an especially forgettable one on Nov. 26, 2016, a pivotal moment of loyalty sparked necessary change and ultimately, a resurgence resulting in a College Football Playoff run. Notre Dame faces Clemson in its first-ever semifinal appearance on Saturday in the Cotton Bowl.

“If I didn’t believe that we were in a position to do this, I would have argued for approaching the consequences of 4–8 differently,” says Swarbrick, who said he wasn’t going to fire Kelly midway through the ’16 season and continued to stick by him. “We had a great coach who had proved throughout his career that he can coach at a championship level, we still had the assets of this university, so was I confident it would be two years or three years? No. But I was absolutely confident that we had the foundation that we needed to be here.” 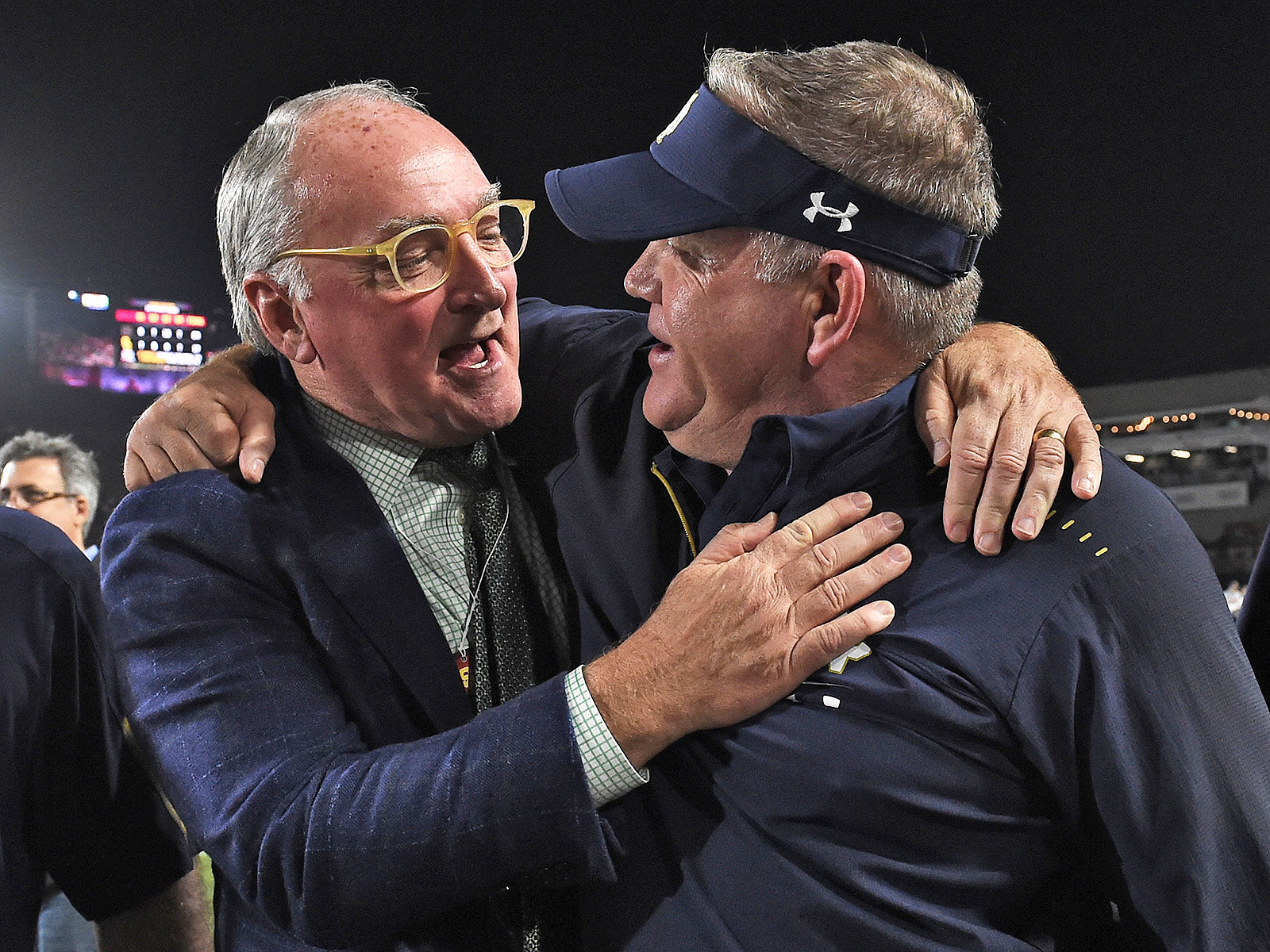 Notre Dame AD Jack Swarbrick (left) and coach Brian Kelly celebrate after the Irish capped off a 12–0 regular season with a win at USC on Nov. 24, 2018.

This year, Swarbrick stood outside the winning locker room at the Coliseum after Notre Dame beat USC, 24–17. Since the last visit to this venue, the Fighting Irish have gone a remarkable 22–3, including a breakthrough 10–3 season in 2017 and a perfect 12–0 in ’18. Swarbrick reflected on the low point from two years ago and praised Kelly for his willingness to reexamine the program.

“A lot of things had to change, including me,” Kelly said. “We didn’t reinvent the wheel here. Behind the scenes, we made some tweaks.”

Some of those tweaks were dramatic, like hiring seven new coaches, including all three coordinator positions plus strength coach Matt Balis, who was the most important addition of all. Kelly altered the team’s approach to practice, recruiting, nutrition, psychology and more. He evaluated himself and took full responsibility for the season’s failure. He started spending more time with his players and picked up yoga.

Other tweaks, though, didn’t require the same overhaul. Notre Dame’s eight total losses in 2016 were the second-most by the program since 1960, but seven were by eight points or less. This signaled there was a foundation. There were young players to develop and core leaders returning to shape the locker room.

“We knew that we had the ability, we knew we were developing experience,” says cornerback Julian Love. “You look at that freshman year and a lot of us were playing. At some points all four DBs out there were freshmen, and that is promising because you knew that was going to develop and grow. All it took was getting a few pieces in the right spot.”

Kelly had the pieces and the budding talent. The key for Notre Dame was to believe things would get better, and that was tricky at the time. Despite coaches and leaders trying to keep everybody motivated, “it’s really hard when you’re losing that much,” says former captain Isaac Rochell, now with the Los Angeles Chargers. Wide receiver Miles Boykin describes campus back then as a “dark place.” He didn’t walk around with his head up because, “you almost wanted to hide from people because you’re embarrassed.” Love says he “felt like people were making jokes about the season” in class. Fans took out a full-page ad in the Observer, the student paper, outlining where the program had failed under Swarbrick and Kelly.

Since that lowest point, the team’s personality has changed. The group has grown immensely close, thanks in part to Balis’s strength program, which has been compared to Navy Seal training in that it’s simultaneously demanding while bringing players together. It has taught players how to fight through stress and fatigue so that they might perform better in the fourth quarter and late in the season. The Irish have also become more businesslike in their approach. There was hardly any celebration after they finished the regular season undefeated or were officially named to the playoff field. That’s because they know there’s more left to accomplish.

And also because they knew all along they could get here.

“There’s a lot of things that went wrong in that season and there’s a lot of things that have to go in the right direction to win,” says former starting quarterback DeShone Kizer, now with the Packers, who was still a second-round pick after only winning four games in his final year of college. “I think that we were really close. It wasn’t necessarily scheme, it wasn’t necessarily talent, it was more of us getting in the way of ourselves and all it took was a good offseason worth of great leadership and Coach Kelly making the proper adjustments.

“We knew that if we could just buy into an offseason and find some direction that we’d get right back to where we were supposed to be.”

LITMAN: Ian Book Has Seized His Moment for Notre Dame

The majority of this team was around for 2016. They know what it’s like to lose a sixth game to Navy on a neutral field on the same Saturday that CFP regulars Alabama and Clemson post shutout wins. After beating USC this year, Love returned to his business problem solving class to a round of applause from his professor and classmates. Boykin has been fielding congratulatory shoutouts as he walks through campus.

“It’s night and day,” senior defensive lineman Jerry Tillery says of this school year. “Everyone is much more excited to be playing, too. And everyone knows that if we get in a close game, or we’re down in the game, we’ve made the right commitments in the offseason and have all been in this together.

“We’ve been 4–8, we know what it’s like to lose a close game and there’s no doubt now that we can win any game we play.”

Swarbrick would never wish for a 4–8 season, but doesn’t deny it probably accelerated the program getting to a better place.

“You can get there sometimes through incremental changes,” Swarbrick says, “or you can have a really tough circumstance visited on you that helps you move more quickly and do the things you need to do.”