The Fighting Irish coach isn’t shy about his appreciation of their abilities.
Jordan Guskey, IndyStar 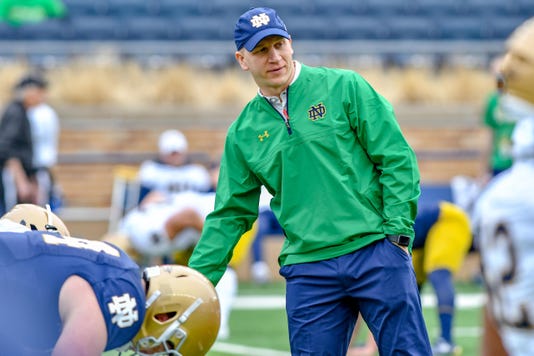 SOUTH BEND – The results have been undeniable for rookie defensive coordinator Clark Lea, the fourth different man to hold the job for third-ranked Notre Dame since the start of 2016.

By almost any measure, the Irish have seen their defensive efficiency spike since Lea was elevated from linebackers coach in early January after Mike Elko jumped to Texas A&M for a massive payday (reported $5.4 million over three seasons).

Thanks to a ferocious pass rush and a sticky secondary, Notre Dame has improved 43 spots in passer rating allowed (third), 14 spots in yards per attempt (tied for second at 5.4) and 18 spots in passing yards allowed per game.

After giving up 23 passing touchdowns with just 10 interceptions in Elko’s sole season, the Irish have cut that first number down to seven while bumping their picks to 12. The longest touchdown pass all year against Notre Dame was 27 yards by Northwestern quarterback Clayton Thorson.

With the Irish set to face No. 2 Clemson on Saturday in a College Football Playoff semifinal, the 37-year-old Lea, a soft-spoken former Vanderbilt fullback, recently answered questions on a variety of topics:

On his first year as a coordinator: “I’ve had a blast. I’m still kind of submerged in it, so I haven’t had a chance yet to really step back and reflect on the year in its entirety. I’m sure there will come a point in January where I’ll be able to do that. I’m more staying in the moment and just focusing on what we need to do to put our best product on the field against Clemson and give these guys a chance to do what they came back to do and what they’re here to do, and that’s win a national championship.” 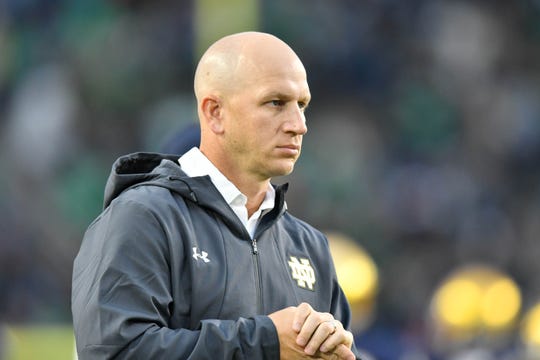 On the Clemson offense: “They’re very skilled. They’re going to do everything they can to get their skill matched up on yours and put you in one-on-one situations. I think they have confidence in their guys that they can win those, and they’ve proven that through the year. … Receiver-wise, they’re big, tall, long and athletic. Anytime you have that many weapons (to defend), you have to pick and choose strategically who you’re going to take away on what snap. That’s a dangerous game to play.”

Scouting report: What to expect from Clemson in the Cotton Bowl

On freshman quarterback Trevor Lawrence: ”The quarterback is young and extremely talented. He can throw the ball from the hash to the sideline without blinking an eye. Through the course of his time being the starter, he’s really strengthened his game. Anytime we go into a game we’re looking for ways to be disruptive to a quarterback because that’s where things start. This game will be no different. I don’t see him as a guy that loses his composure often. I see him as a guy that is very steady and very capable.”

On Clemson running back Travis Etienne: “They have a running back that’s as good as any we’ve faced. He’s an exceptional player. They have a stable of running backs that are really good, but No. 9 makes it go for them. You have to be really careful in (not) paying too much attention to the perimeter guys because the guy (Lawrence) is handing the ball off to is really good as well. Their O-line and their tight ends do a great job opening up vertical cuts and vertical seams.”

On the graduate trio of Jerry Tillery, Drue Tranquill and Te’von Coney: “Their contribution from a leadership standpoint, we can’t put a value on. For them it’s about building a legacy. They wanted to leave this program better than they found it. Through their buy-in, through their commitment, they’ve been able to do that. What they’ve done to firm up the foundation and the younger players just having been able to interact with them this season, it’s been incredibly impactful. Beyond that, I can make mistakes at times as a play-caller, and they will make me right. I don’t know that there’s any more comforting feeling than that.”

More: It took time, but Jerry Tillery became leader Irish always wanted him to be

On being overlooked as a defense: “I don’t want that to be where we spend our time. This for us has been a journey to discover who we are as a unit and who we are as a team. That hasn’t changed. When you put too much stock into what other people think or what the opponent is doing or who the opponent is even … every day we’re just looking to evolve.”

On playing the underdog card: “Look, it’s human nature, I think. We all have chips on our shoulders. I don’t want that to go away. That’s something we talk about daily. But at the same time, we need to hone in on what’s actually important here, and that’s us going out and playing the best we can play. I don’t need to use something outside to get these guys charging in a direction. This has been a long and steady course we’ve been on. We know what’s at stake. We have a belief in what we’re doing.”

More: ‘Nobody likes Notre Dame,’ and the players are fine with that

On defensive balance: “Sometimes our front makes our coverage better and sometimes our coverage makes our front better. We’ve played fairly consistent through the year, not allowing big plays or certainly explosive-play touchdowns, and I think that’s a big part of the formula. We’ve rallied and tackled the ball. We’ve made teams drive the ball the length of the field. When you do that, I think you give yourself a chance for disruptive snaps over the course of the game.” 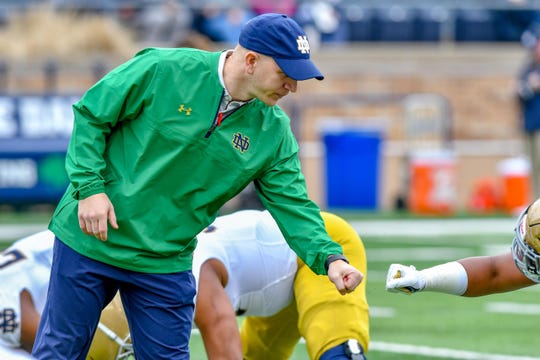 On having five weeks between games: “There’s a fine line between leaving football behind for too long but also pressing for too long on the upcoming opponent. When you have a long time to game plan, you can get yourself in trouble. You can look at things and discover things that maybe are different than what you’ve done all season to take plays away or take players away. It’s a balance. You have to be different enough to present challenges but also stick to some of the core principles that have gotten you to this point, so the guys can all play fast.”

On making it look easy as a new coordinator: “For me, if it’s looked easy, I assure you I don’t have any more hair to lose. It’s been a great experience. The transition from being a position coach to a coordinator has many inherent challenges. I think the hardest part has been managing those in a way that allows that unit to move forward. I can’t get bogged down or behind. If I get behind, the operation slows down. That’s been personally my greatest challenge — just staying ahead.”

On his biggest emphasis for Dec. 29: “For us it’s not going to be venturing too far from technique, execution and finish. We’ve got to go out and play a fundamentally sound game and play hard. We can’t deviate too far from who we’ve been. Our team believes in each other, believes in our ability to make plays at critical points. So, I’m excited for them to go out and play and have this stage to put on display all the things they’re worked for.”

Reinventing Ian Book: ‘Tell me why you can’t be Drew Brees?’

More: Notre Dame brings the fight into living rooms across the land on Signing Day