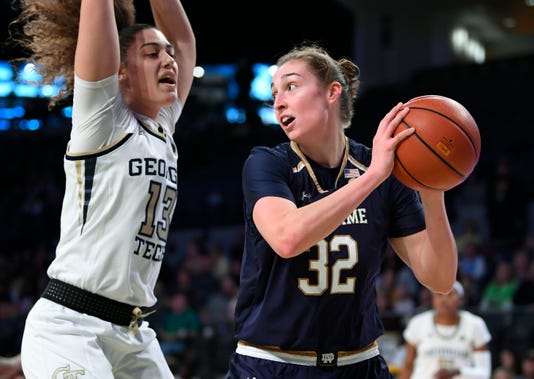 No. 2 Notre Dame 76, Georgia Tech 55: Jessica Shepard scored 19 points, most on layups, and No. 2 Notre Dame strengthened its case for the top spot in the Top 25 by overpowering.

With No. 1 UConn’s loss to Baylor on Thursday night, Notre Dame (14-1, 2-0 Atlantic Coast Conference) could claim the top spot in Monday’s new poll. UConn gave the Fighting Irish their only loss on Dec. 2.

Notre Dame has won seven straight entering an ACC showdown with No. 3 Louisville this Thursday night.

Led by Shepard, Arike Ogunbowale, who had 13 points, and Brianna Turner, who had 11 points, the Fighting Irish outscored the Yellow Jackets 60-20 in the paint.

Coach Muffet McGraw called a 100-44 win over Pittsburgh on Thursday night the “best game” of the season for the Fighting Irish. Notre Dame led 60-14 at halftime in that game but wasn’t as dominant early against the Yellow Jackets.

After leading only 18-15 after the first quarter, Notre Dame outscored Georgia Tech 21-7 in the second period. The Fighting Irish established dominance inside, opening the quarter with an 8-0 run that started with back-to-back layups by Brianna Turner.

Dixon had the Yellow Jackets’ only three field goals of the second quarter.

Notre Dame stretched its lead to 30 points at 72-42 in the final period. Marina Mabrey had 11 points for the Fighting Irish.

A highlight for the Georgia Tech students in the crowd came when Arike Ogunbowale and Marina Mabrey combined to miss four straight free throws on successive possessions. Fans chanted “Free T-shirts” after each first miss at the free-throw line and cheered when the second misses led to the free prizes being tossed into the crowd.

Butler 66, St. John’s 45: Kristen Spolyar scored a season-high 23 points and Katherine Strong added 13 as the Bulldogs improved to 4-0 in Big East play. Butler put the clamps on the Red Storm defensively, holding St. John’s to 33 percent shooting and forcing 22 turnovers. Michelle Weaver led the defensive charge with seven steals and two blocks. The Bulldogs have won eight games in a row after losing to Indiana on Dec. 5. At 14-1, Butler is one win shy of equaling its win total from last season in a 15-17 campaign.

Indiana State 61, Southern Illinois 58: The visiting Sycamores (7-6, 1-1 Missouri Valley) rallied from a six-point deficit early in the fourth quarter. Ty Battle’s layup with 42 seconds to put ISU up for good at 58-57. Tamara Lee led the Sycamores with 17 points.

Outlaw helps No. 10 Hokies down Fighting Irish, 81-66
8 teams that could ruin Alabama-Clemson V next season