Syracuse, N.Y. — After Syracuse football defeated Louisville 54-23 on Friday night, quarterback Eric Dungey posed for a picture with a fan holding a sign midway through his senior walk.

It read: ‘LOOKS LIKE ADIDAS FORGOT TO PAY THE LOUISVILLE FOOTBALL TEAM TOO.’

Orange head coach Dino Babers wanted his program to “right a wrong” when the Cardinals visited the Carrier Dome, and his team accomplished just that, dispatching U of L in embarrassing fashion. Louisville turned the ball over four straight times in the first half, committed 17 penalties and appeared as mentally disengaged as a football team can in the Atlantic Coast Conference.

Dungey said he “really wanted to win by a lot so I’m happy we did.” But by and large, the feeling surrounding the program after the contest wasn’t the exuberance typically brought on by an emotion-driven victory.

But in 2018, Syracuse (8-2. 5-2 ACC) just has so much more to play for — an unfamiliar role for a program that was 1-15 in its last four Novembers coming into this season. The emotional capacity for enjoying a victory over the Cardinals (2-8, 0-6), winless against Power-Five opponents this year, was limited by that fact. And that’s a good thing. 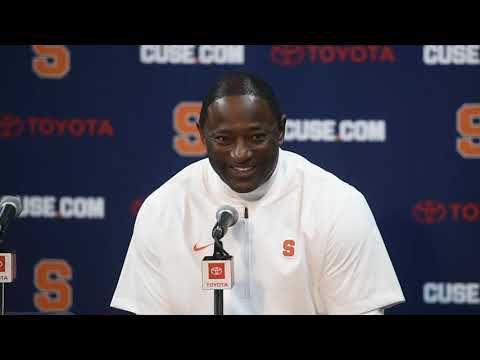 That reserved reaction is as significant a marker as any in the growth of the program under Babers, now in his third year, and the expectations that have shifted this fall.

Louisville is a shell of the program it was during the Lamar Jackson era while the Orange has a New Year’s Six bowl bid to play for. And to earn it, SU will need to upend No. 3 Notre Dame (10-0) at Yankee Stadium next Saturday.

“Obviously it’s going to be a very tough opponent, one of the best teams in the nation,” Dungey said. “But we’re the underdog again and we like being the underdog.”

For the senior class that was celebrated in the Carrier Dome on Friday night, next week’s matchup provides one of the final opportunities to shape their legacy. It could be remembered as the most meaningful chance the group has experienced in its time on campus, especially if SU ends up playing in the Pinstripe Bowl (a reasonable, if not likely outcome should the team fail to win out).

A group that has waded through a head coaching change, multiple scheme shifts and a bevy of positional coaches can further bury the team’s recent woes this weekend.

Dungey has remained healthy down the stretch of a season for the first time in his career. A defense that was decimated during Babers’ first two seasons is one of the nation’s leaders in turnovers and sacks.

Defeating the Fighting Irish in an environment that will be closer to road than home would likely elevate this year’s group into the upper echelon of teams in program history.

“It’s a game that gives us an opportunity to prove that we belong,” Babers said, referring to the national conversation. “To prove we are better than what people think we are. It doesn’t mean we are going to prove it. It just means that we have an opportunity. This football team was picked to be dead last, and now we are at where we are. We’re on the map. Now, we have the opportunity to get a red circle on the map.”

Notre Dame, like Syracuse, has everything to play for, and then some. Win out and the Fighting Irish are positioned to compete in the College Football Playoff.

UND defeated Florida State 42-13 on Saturday night, but half of their wins have been by 10 points or less. And surely, after SU let a win over one national contender slip away at Clemson earlier this year, the team will be eager for a chance to knock off another.

Said Babers: “If we put a plan together and play extremely well, we will have a chance. We’re going to go out there to play, whether it is snowing or raining or sunny or windy.”