O.K., maybe that’s not entirely true. In any breakup—be it romantic or pass-related—each party usually deserves a share of the blame/credit. And sometimes there’s another guy (the quarterback) contributing to the predicament.

This may feel like an inopportune time of year to discuss such matters, but there really is no good time. So on the eve of Christmas, and fairly close to the eve of the College Football Playoff and a Cotton Bowl matchup against Clemson, Notre Dame cornerback Love is going to teach us how to break up. Because, as the Fighting Irish video department pointed out earlier this season, the junior from Westchester, Ill., is very good at breaking up.

Julian Love’s breakup tip No. 1: Let your fear be your guide.

Love didn’t come to Notre Dame expecting to wind up the school’s career leader in pass breakups. In high school, he sought interceptions. He thought that would continue into college. Then he found himself on the field as a true freshman at Darrell K Royal–Texas Memorial Stadium during Notre Dame’s 50–47 double-overtime loss to Texas. A cannon boomed after every Longhorns touchdown, and Love went from thinking about interceptions to thinking about survival.

Love was one of five true freshmen who wound up logging starts in the Notre Dame secondary that season*. For part of that season, Love was too afraid to turn his head while in coverage. “You’re so nervous that you don’t even want to look back for the ball when it’s thrown,” he says. “It’s like ‘I don’t want to look and miss.’ It was just nerves that made me do that early on.”

*Want an easy recipe for going 4–8? Find yourself in a spot that requires that many young contributors in the defensive backfield.

Love also realized that receivers would make terrible poker players. “It might sound weird, but if I’m running I’m looking when he turns his head at his eyes,” Love says. “If I see his eyes getting wide…”

Think about it from the receivers’ perspective. You’re giving maximum physical exertion, and you have to concentrate on catching a fast-moving oblong spheroid with one or more people waiting to hit you. Your eyes will turn into saucers when the ball comes near, no matter how badly you’d like to hide your anticipation. “That’s not something they can control,” Love says.

As Love grew more comfortable with the speed of the game, he learned that on some plays, he could gather this information and turn his head to see the quarterback or the ball. The fear fried his nerves at first, but it made him better in the long run. “It transitioned to me looking when it’s appropriate and learning the key details of what the receivers are looking for,” Love says.

Julian Love’s breakup tip No. 2: Know when to break up and when to make a bigger commitment.

The out route simultaneously offers the most potential glory and the most potential misery for a cornerback. Jump the route and arrive when the ball does, and it might be a pick-six. Jump the route too early, and the receiver will make the catch and run all day. Get caught flat-footed trying to decide whether to jump the route or secure the tackle, and then things can get really embarrassing. “That’s where double moves come into play,” Love says.

A double move is a combination of a short route and a much longer route. A Sluggo (slant and go) is exactly what it sounds like. On that route, an outside receiver cuts in, plants and pushes straight upfield. In the out route scenario described above, Love has to beware of the out and up. A receiver might run an out, then stick his foot in the ground and push upfield when a corner bites on the false route.

But if he reads the quarterback’s tells and reads the receiver’s eyes, Love can make the correct choice. And sometimes, a breakup isn’t necessary. Sometimes, it’s better to pull in rather than push away—especially when pulling in results in a touchdown for your team.

Julian Love’s breakup tip No. 3: Even when you’re planning to break up, sometimes you have to stay together and let them down easy (or hard).

When guarding a receiver, Love will use his near arm to try to swat the ball. The other arm? Watch as it hovers around the receiver’s waist. Love has to be careful because if he gets too handsy with his off arm, he might draw a flag. But he needs that arm ready to close around the receiver’s body.

If Love can deflect the ball, great. But sometimes the pass reaches its intended target. So Love needs that off arm ready to constrict and make the tackle to keep the receiver from gaining any additional yardage.

Julian Love’s breakup tip No. 4: When in doubt, replace his hands.

Todd Lyght, the 12-year NFL veteran who coaches Notre Dame’s secondary, teaches his DBs that the surest way to break up a pass is to find a way to replace the receiver’s hands with one of your own.

One of his favorite breakups came in 2017 on a third-and-two play at Stanford. Love was covering 6’3″, 225-pound receiver J.J. Arcega-Whiteside, who basically is a living, breathing third-down conversion.

The defense Notre Dame was playing called for Love to play inside leverage before the snap. Because of the play Stanford called, that put Love at an immediate disadvantage. “He got a good release off me,” Love says. “And I jumped inside to block it, but he wasn’t going inside. I was beat off the release.”

Arcega-Whiteside ran a corner route, pushing about 15 yards up the field before angling toward the sideline. Love, playing catch-up the entire time after getting beat off the line of scrimmage, didn’t have much time to look at quarterback K.J. Costello. Instead, he used tip No. 1. Take a look at Arcega-Whiteside’s eyes as the ball approaches. 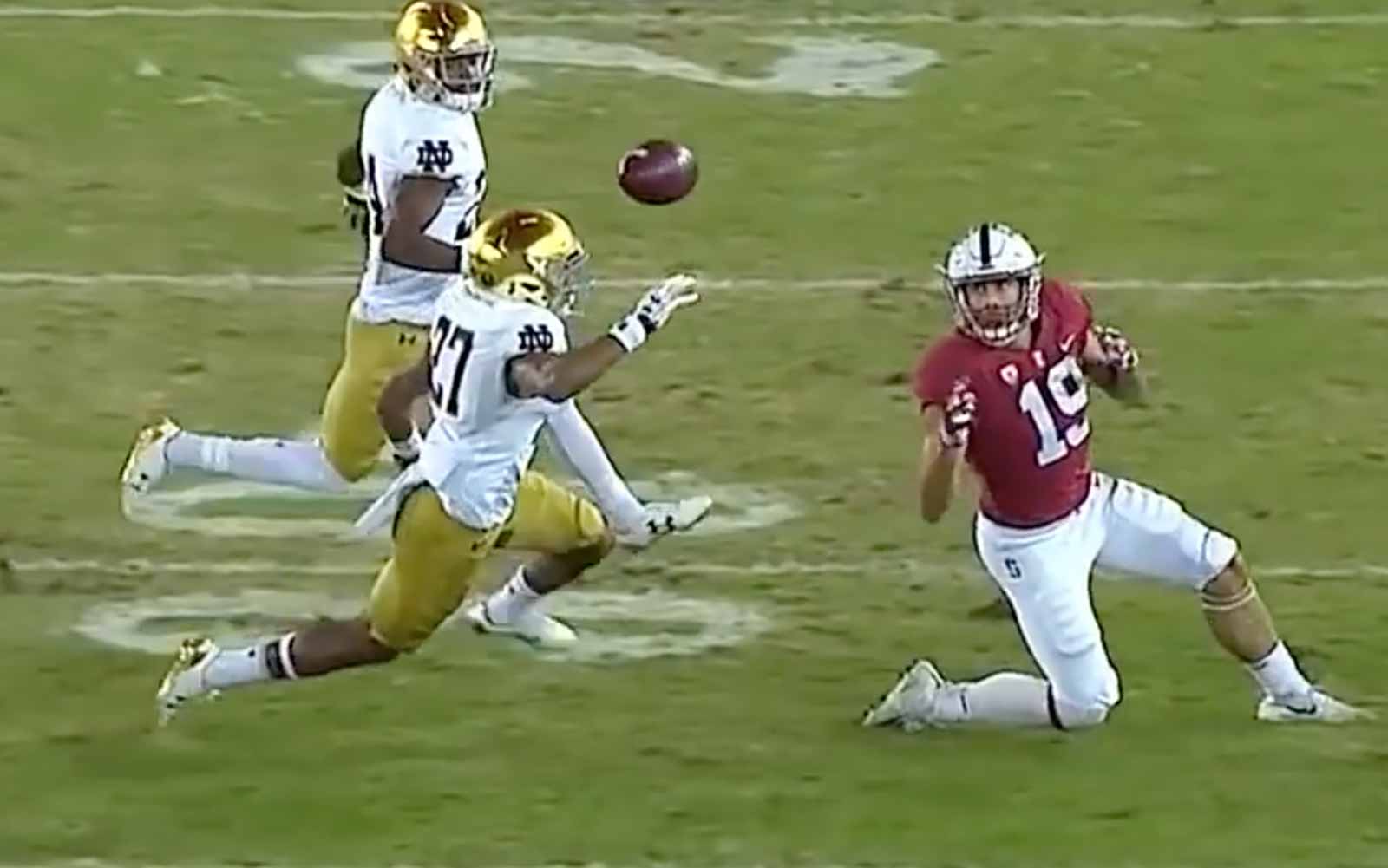 That gave Love a basic idea of when the ball would arrive. He knew by the eyes and the fact that Arcega-Whiteside slowed that Costello had thrown the ball slightly behind where it was supposed to go. An interception was still impossible, but the slight misfire created a breakup opportunity. Now, Love just had to replace Arcega-Whiteside’s hands. 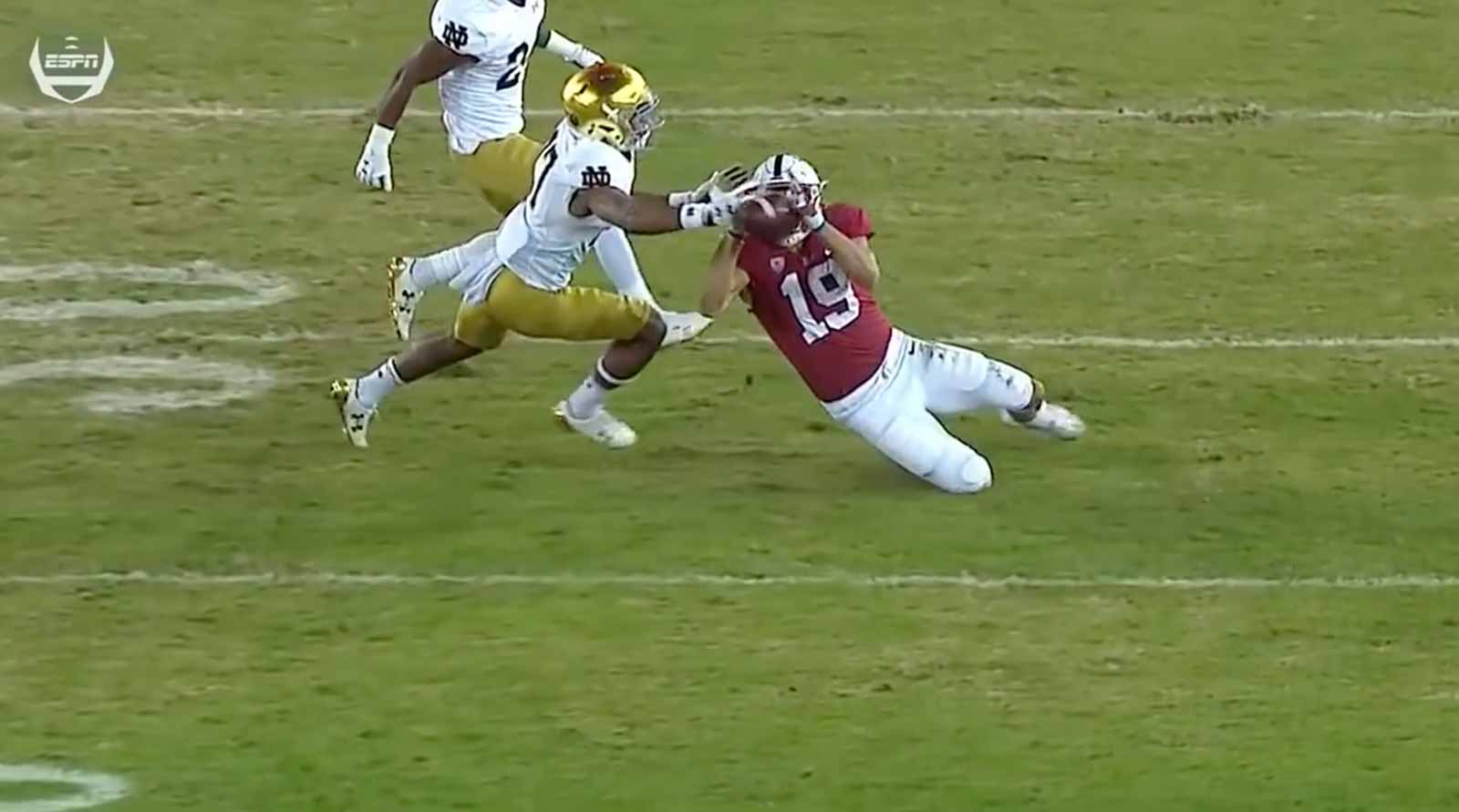 Love held his right hand for a beat as he waited for the ball. Then he fired it into the gap between Arcega-Whiteside’s waiting hands just as they began to come together in anticipation of the catch. When the ball arrived, it struck the back of Love’s right hand—which was directly between each of Arcega-Whiteside’s hands.

Breaking up will always be hard to do, but it’s a little easier if you follow Love’s advice.

7. The Nightmare Before Christmas

1. Want to watch Nick Saban and ESPN’s Maria Taylor play hoops while also advertising for a luxury car brand of which Saban just happens to co-own a dealership? Of course you do.

2. Michigan State landed its first Australian punter this week when Jack Bouwmeester from Bendigo signed with the Spartans. On National Signing Day, Michigan State coach Mark Dantonio joined myself and Jason Horowitz on Playbook on SiriusXM Channel 84. I asked Dantonio about the process of recruiting Aussie punters, and his answer was amazing.

3. Meanwhile, Michigan quarterback Shea Patterson will be returning for his senior season in Ann Arbor.

The kids dragged me to Bumblebee this weekend. I wasn’t thrilled. Michael Bay had thoroughly destroyed my favorite childhood toy line and cartoon at the multiplex, and I didn’t feel like further contributing to its demise.

So imagine my surprise when I watched a Transformers movie directed by someone who actually liked Transformers. Bay was a producer, but he let Travis Knight make a movie for all of us who cried when Optimus Prime died in the original Transformers animated movie. (Because we were seven.) Hopefully, this will make enough money to convince Bay to let Knight make a new series of movies that are actually—what’s the word?—good.

I’m enjoying some time at home after a college football season that felt like it went by way too quickly, which means I haven’t been sampling all the delicious things this glorious nation has to offer. But this time has given me a chance to reflect on the best things I ate this season. So it’s time to present the Piggies… 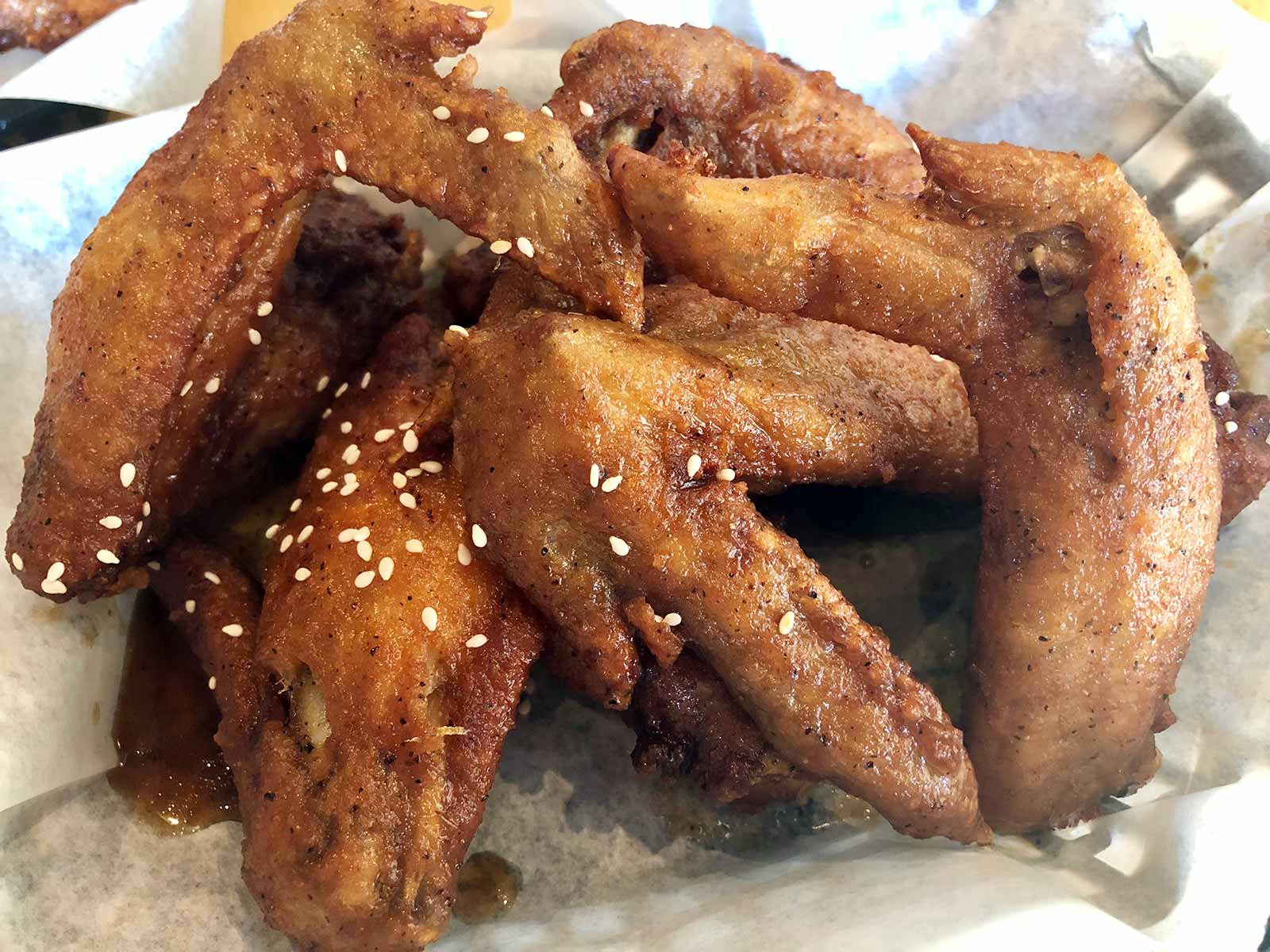 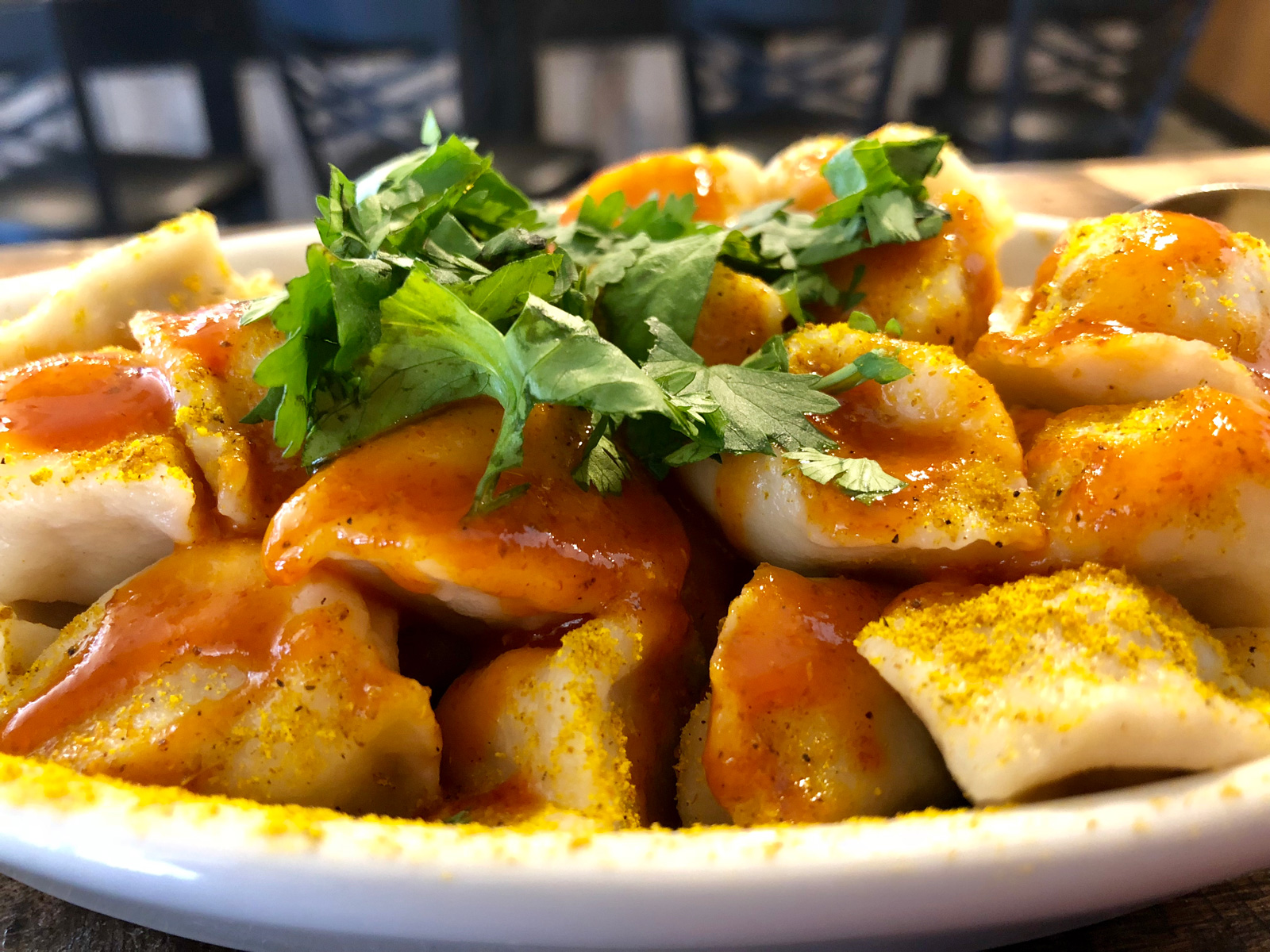 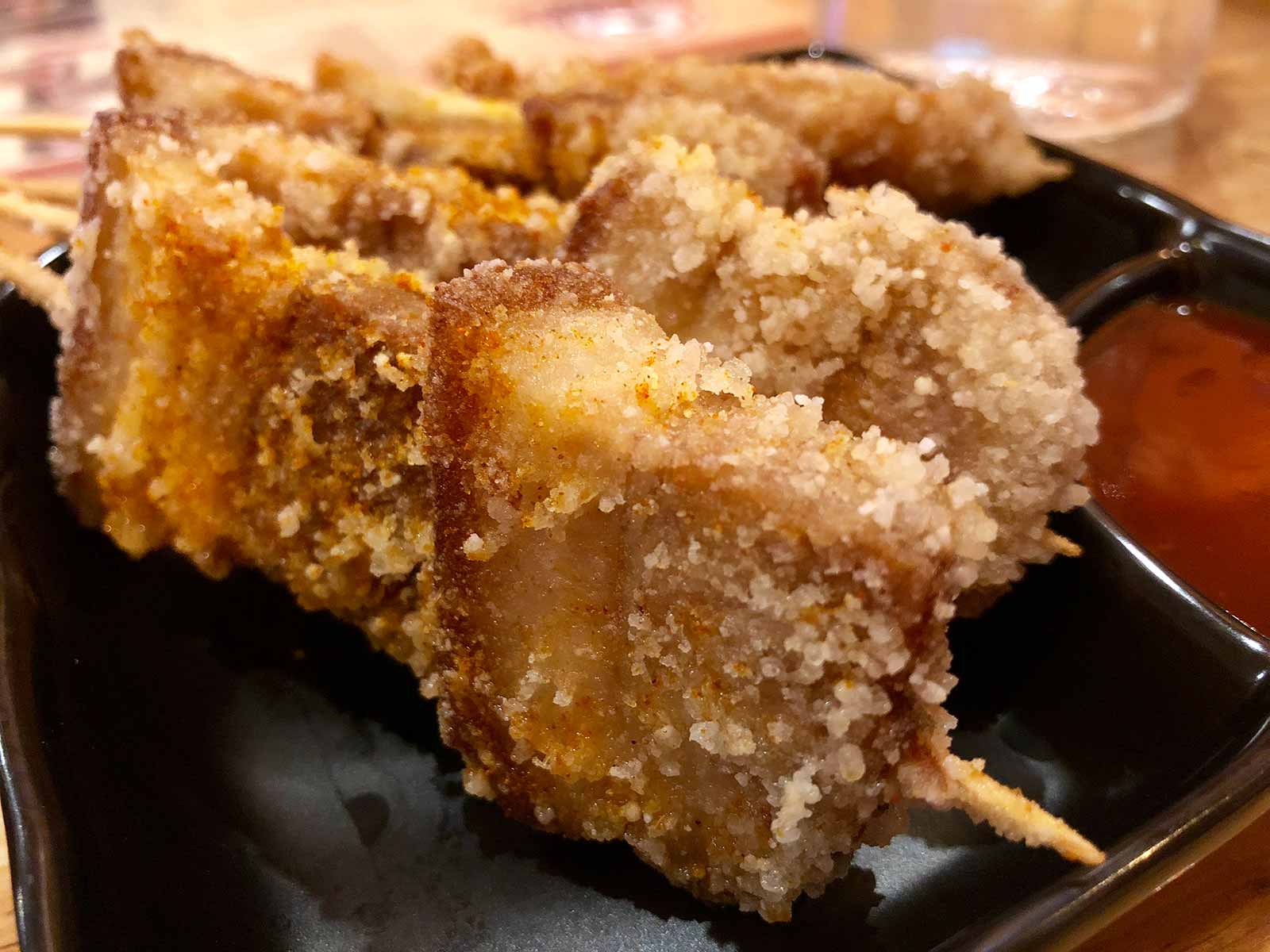 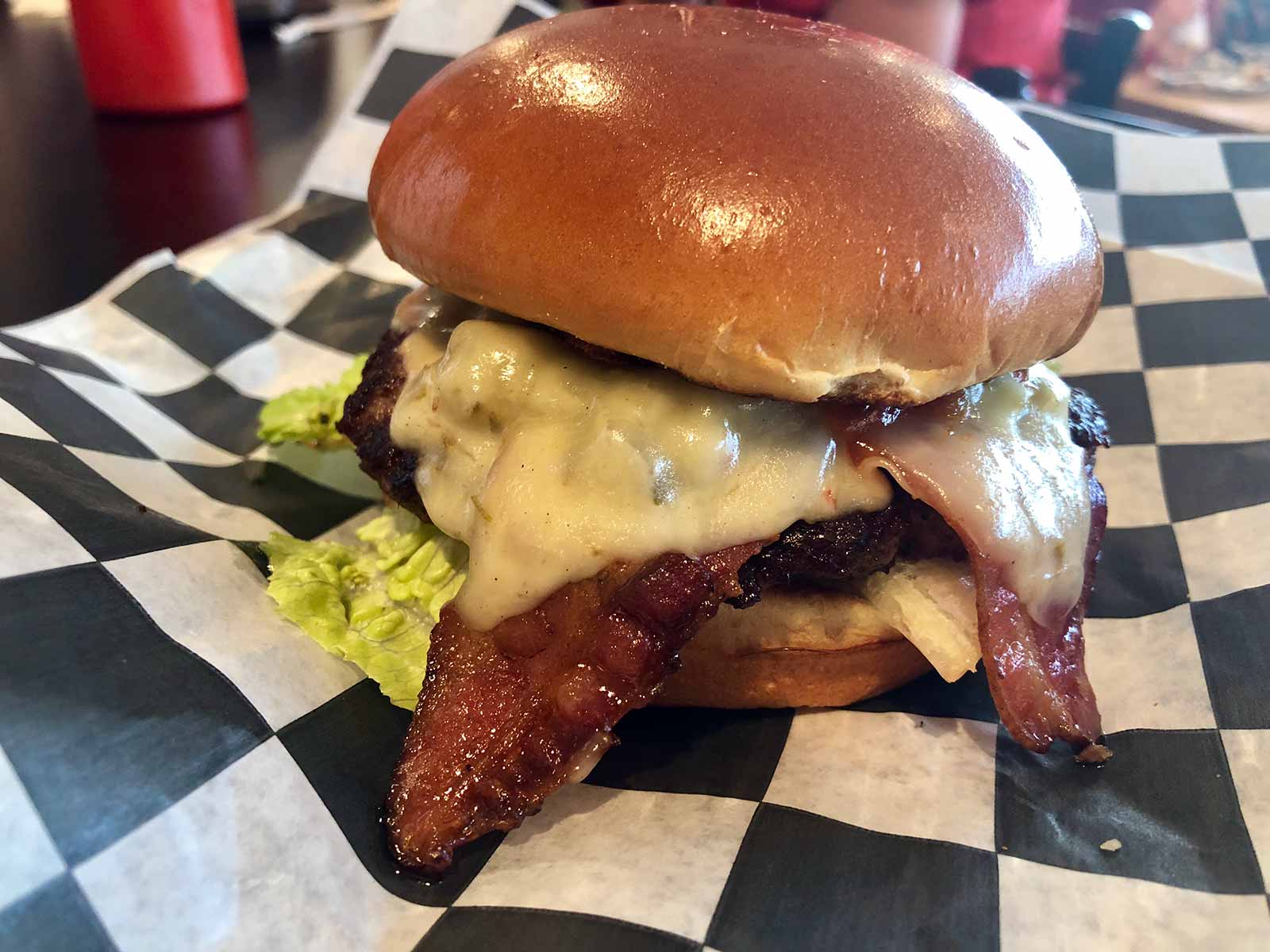 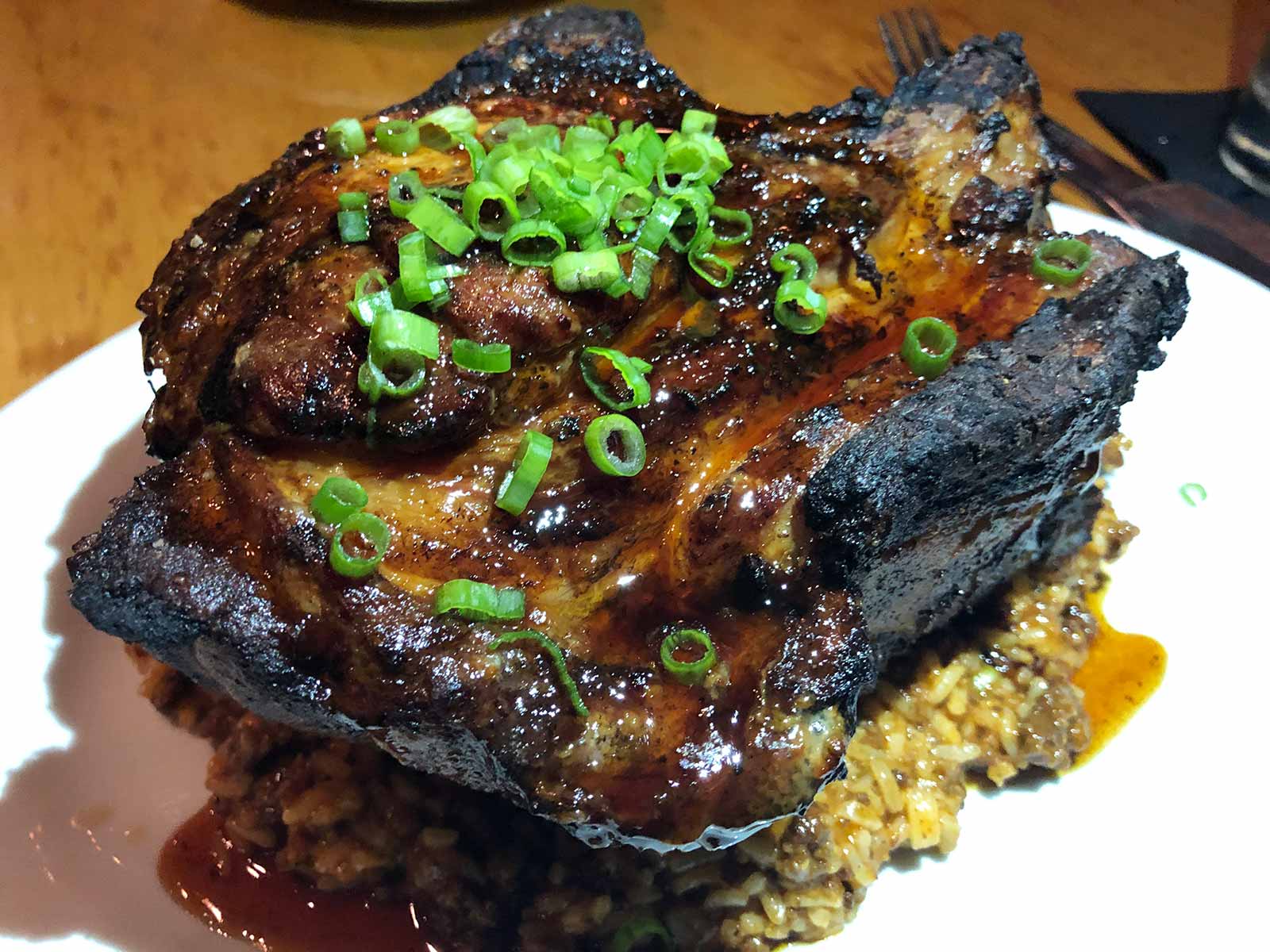