Tillery has been a force for the Fighting Irish all season.
Jordan Guskey, IndyStar 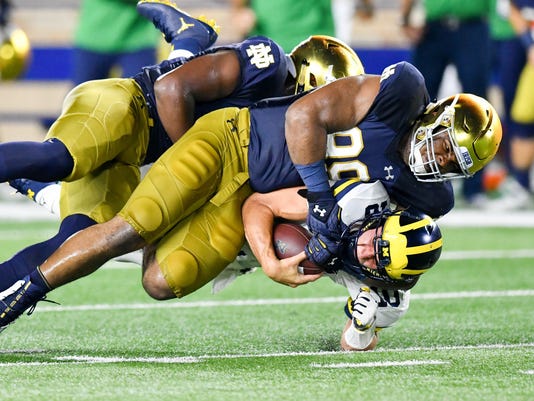 SOUTH BEND – Drue Tranquill never used to see Jerry Tillery in Notre Dame’s Guglielmino Athletics Complex before practice until Tillery had to be there.

Whether it was 1 p.m. or 1:30 p.m., when Fighting Irish players taped up for practice, that’s when the two-time captain linebacker would see his star defensive linemen arrive at “The Gug.” But through the fall of 2018 Tranquill has seen the 6-7, 305-pound Tillery there all season long an hour or two before rehabbing and watching film.

To Tranquill that’s the sign of a pro, someone who cares about what they’re doing. Someone defensive line coach Mike Elston would say doesn’t stop at being a great teammate who has a standard and holds himself to that standard. Someone who brings others along with him — a leader.

More: 5 Notre Dame football recruits that could make an instant impact next season

More: What to expect from Notre Dame at the Cotton Bowl

“Jerry (would) be up there as one of the guys I think has grown the most in terms of maturity over the last year,” Tranquill said. “He was a guy that was kind of introspective and was only kind of worried about his game. I’ve seen him take a defensive line group and charge them every day, whether it’s for practice, whether it’s for a game. He’s done a great job.”

For Tillery, it was just a matter of time before he figured out how to be the guy for younger players that former teammate Sheldon Day, now with the San Francisco 49ers, was to him.

“It comes with development and understanding of leadership and I’ve been able to do that since I’ve been here,” Tillery said. “Also, witnessing it.”

Tillery’s mom, Mildred, always knew her son would be successful up north.

He’s the baby of the family, the younger brother to three sisters, so the distance between Notre Dame’s campus and their Shreveport, Louisiana home posed an issue for Mildred at first. But the Fighting Irish program grew on her, and she’d always seen him complete the tasks he set out to do.

Jerry Tillery was the Times Defensive Player of the Year while at Evangel in 2014. He is now a freshman at Notre Dame. (Photo: Douglas Collier/The Times)

When Tillery was 8 years old she said he taught himself to write with his left hand, and committed to doing so for about five years, because he wanted to improve on the low percentage of the population who could. He had a budding interest in the country’s affairs in middle school, so she said he would record C-SPAN and watch it every day after football practice. And around the time he was 10 years old he used her email to correspond with a member of Congress from Louisiana.

Tillery was chosen for the U.S. Army All-American Bowl and named Shreveport Times All-City Defensive Player of the Year as a senior at Evangel Christian High School, where he played both ways. He was rated a four-star recruit, per 247Sports, and ranked 156th nationally in the Class of 2015.

Tillery embraced the full-time switch to the defensive line when he enrolled early with the Fighting Irish.

What’s followed is a career during which Tillery has amassed 49 appearances, 135 tackles, 24.5 tackles for loss and 13.5 sacks. His role expanded as an upperclassmen, and after he led the team in quarterback hurries and sacks as a junior — which helped him win the program’s Moose Krause Lineman of the Year award — he decided to come back for a senior season.

This season, Tillery leads Notre Dame with eight sacks, including four against Stanford, on his way to pacing what is a deep Notre Dame defensive line with All-America recognition from Sports Illustrated, CBS Sports and more. He repeated as the team’s defensive lineman of the year nod. 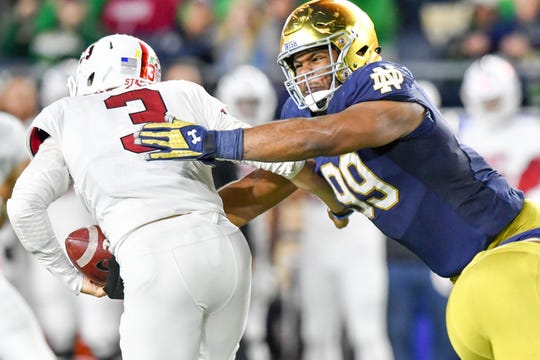 “He’s been a force for us in the middle, getting pressure on the quarterback,” said Tranquill about Tillery. “He’s been a force in the run defense. Obviously, playing Will linebacker, it’s great to play behind him. He’s an incredible three-technique, eats up a lot of double teams for me.”

There have been lapses in judgement. Tillery missed the Fiesta Bowl against Ohio State as a freshman for a violation of team rules. And as a sophomore against the USC he stepped on a player’s leg and nudged another player’s head with his foot at different moments during a game while both were on the ground.

He apologized, moved forward and even Fighting Irish athletic director Jack Swarbrick commended his growth after Notre Dame’s win against USC on Nov. 24 in Los Angeles.

“I’m especially proud of the cycle for Jerry Tillery from the time he left this field two years ago, to come back and play the way he did tonight and have a key sack,” Swarbrick said. “That’s really cool.”

Mildred saw the growth, too. She sees a young man who’s more mature, civil and self-aware. An individual who doesn’t live in his own bubble anymore and who’s traveled to South Africa, Italy and Poland. She isn’t surprised her son became a world traveler.

“Sometimes I have to pinch myself and wonder what did I do for God to choose me to be his mama sometimes,” Mildred said. “I’m just so proud of him.”

When the morning of Notre Dame’s Dec. 29 matchup against Clemson rolls around, Mildred plans to send Tillery a text that’ll read something like, “It’s a good day to be Jerry, wake up and go make me proud.”

The Cotton Bowl will be at AT&T Stadium in Arlington, Texas. So, she and her husband won’t be able to set up in the spot they would for a Fighting Irish home game to see Tillery and his teammates make their ceremonial walk to the stadium. But the text will send. And they’ll be there. Mildred hasn’t missed a game the past two seasons and her husband, she jokes, hasn’t missed a game dating all the way back to Tillery’s pee-wee years.

This will be the closest game all year to Shreveport, too.

“Everyone I’ve ever known lives like three hours from the biggest game I’ve ever played in,” Tillery said. “So, it’ll be a lot of fun.”

Wherever Mildred does see Tillery as he enters the stadium and watch the Fighting Irish in the stands she’ll see a son who projects as an early-round draft pick. A prospect who, while he’s taken charge between the lines and is confident he’ll make the Tigers recognize his presence, off the field is self-sufficient enough to no longer ask Mildred to send him a care package almost every week.

On Ian Book: ‘Tell me why you can’t be Drew Brees?’

Why is Notre Dame Football Being Disrespected heading into the Playoff?
Most dramatic college sports comebacks of 2018