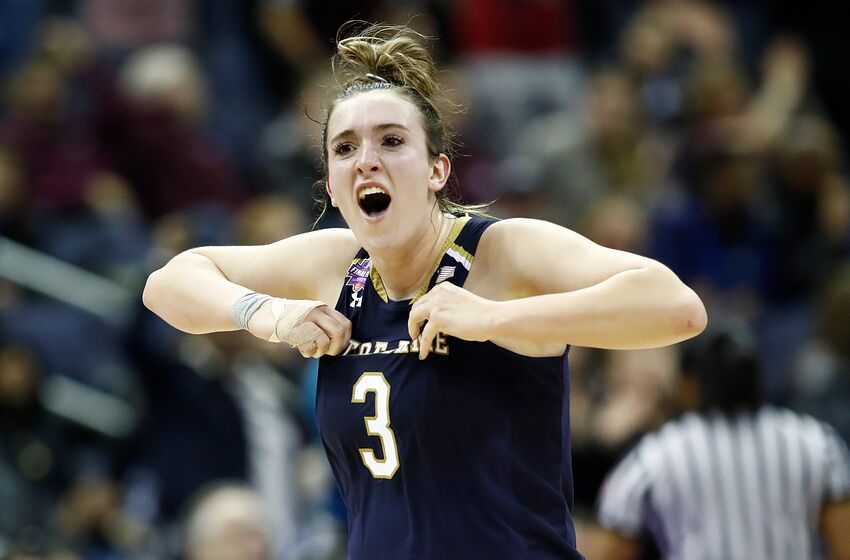 COLUMBUS, OH – MARCH 30: Marina Mabrey #3 of the Notre Dame Fighting Irish celebrates her teams lead late in the game against the Connecticut Huskies during the second half in the semifinals of the 2018 NCAA Women’s Final Four at Nationwide Arena on March 30, 2018 in Columbus, Ohio. The Notre Dame Fighting Irish defeated the Connecticut Huskies 91-89. (Photo by Andy Lyons/Getty Images)

Notre Dame Football: Irish Squeeze the Orange in the Bronx by Jack Leniart

The Notre Dame Women’s basketball team will hit the road for the first time this season as they take on DePaul. Here is a preview of the top 15 matchup.

After winning their first two home games, the Notre Dame Women’s Basketball team will hit the road on Saturday afternoon to take on #15 DePaul. This will be the first true test for the Irish on the season after defeating Harvard and Penn to start the year. DePaul comes into the game 1-0 after beating Green Bay.

It’s been a pretty good start to the season for the Irish as they have gone 2-0 and have already eclipsed the 100 point mark. But there are still some things that the Irish will need to clean up here in the coming weeks before ACC play begins. First up is limiting turnovers. With a freshman in at point guard, Jordan Nixon’s inexperience at this level has lead to quite a few turnovers in the first two games. But Nixon isn’t the only one plagued by the turnover bug, so that is something that the Irish need to work on overall.

Another thing that needs to improve is their defense. Head coach Muffet McGraw said coming into the season that this was an area that her team needed to improve in, and it is evident that they still have a lot to work to do.

Overall, playing a top 15 team this early in the season will be good for the Irish. With the UConn game just over two weeks away, this will be a test to see where the number one team in the country really needs to improve. If the Irish are able to get Marina Mabrey back against DePaul, that could really bolster the roster.

DePaul has always been a good matchup for the Fighting Irish. Head coach Doug Bruno is one of the best in the game and is always a good jousting partner for Muffet McGraw. The Blue Demons opened up against Green Bay on Nov. 9 with a 73-64 win.

Next: William and Mary Game Provides Opportunity got Irish

Rebekah Dahlman will be a player to keep an eye on for Irish fans. Dahlman put up 21 points in the opener, shooting 50 percent from the floor.

ESPN Analyst Releases Score Prediction For Clemson-Notre Dame
Who are the finalists for AP college football coach of the year?