In 2012, I wrote a story. The kind you don’t ever forget. It was about Declan Sullivan, a 20-year-old junior at Notre Dame. He was named after an Irish saint, adored football and his family, and was known for the video camera he lugged everywhere, filming science projects and home movies. He loved to watch films. He planned to make them.

The job a professor helped him secure at school—as a videographer for the football team—combined all of his interests. He filmed the cheerleaders, the Fighting Irish’s leprechaun mascot and those famous golden helmets, and he did that on the field at Notre Dame Stadium, throughout games that meant so much to him.

Declan Sullivan died on Oct. 27, 2010. He was filming football practice from atop a 40-foot aerial lift, which collapsed when heavy winds reached 53 miles an hour. Notre Dame conducted an investigation that produced a report of more than 100 pages. It acknowledged the school’s mistakes, the errors in judgment, the practice that should have been held inside, the lift that should never have been operated. From the outside, a lawsuit appeared imminent. The family would win millions.

Except that’s not the route the Sullivans had chosen. They didn’t blame the school, even as they confronted the role that Notre Dame employees had played in Declan’s death. They never even considered a lawsuit. They worried more about how to honor Declan and best utilize the donations that were pouring in.

As the years passed, I wondered sometimes about the Sullivans. Declan and I had one mutual friend, a talented writer named Chris Hine, who writes for the Star Tribune in Minneapolis. Over dinner one night in Minnesota this August, I asked Hine if he had heard anything about the Sullivans. He had not. Not recently. And the very next day, I received an email from Tim Coffey, one of Declan’s oldest friends. He said that E:60 had produced a segment on the Sullivans that would be released soon.

I cried when I watched it. I’m sure that I wasn’t alone. But I also wanted to know more, and so I called Barry Sullivan, the family patriarch, to see what had happened in the six years since we last spoke, sharing a few tears over fish tacos at a Chicago restaurant. For the first year after his son’s death, Sullivan says the family intentionally kept a low profile. They didn’t want to keep answering questions about a lawsuit they didn’t plan to file. They needed space to grieve. But the donations, unsolicited donations, kept arriving in their mailbox. “It wasn’t some happy story, like we won the lottery,” Barry says. “But there was a kernel of an idea there. What can we do with it? Maybe instinctively we knew this was the better course.”

A friend recommended the charitable organization Horizons for Youth, which is based in Chicago and serves disadvantaged children in heroic fashion. For our interview, Barry actually called from Horizon’s office and not for sentimentality. He works there now, taking the train in each morning from the Chicago suburbs.

For decades, Barry had been a successful engineer. But after his son died, he told his wife, Alison Drumm, that he thought he was at a critical juncture in his career, that he couldn’t stop thinking about what might be next. He was on the board at Horizons by that point, and at one meeting more than three years ago, he threw out a “crazy idea.” The board reacted unanimously. They’d always figured he’d end up there, they told him. So he left his engineering gig, worked in fundraising for Horizons and eventually became the vice president of finance and operations.

“The Sullivans have changed the entire trajectory of our organization,” says Audrey George, the Horizons CEO. “They take no pleasure in the attention paid to them. It’s all grace and generosity.”

The world needs more people like the Sullivans, she says. They created a subset of students at Horizon who would receive support from the memorial fund they had created with those donations. That “class” consisted of 40 students initially. “Declan’s 40,” they called it. The family held a fundraiser inside a ballroom, with more than 500 donors in attendance, and on that night alone they raised over $600,000. “More than we ever could have anticipated,” Barry says. 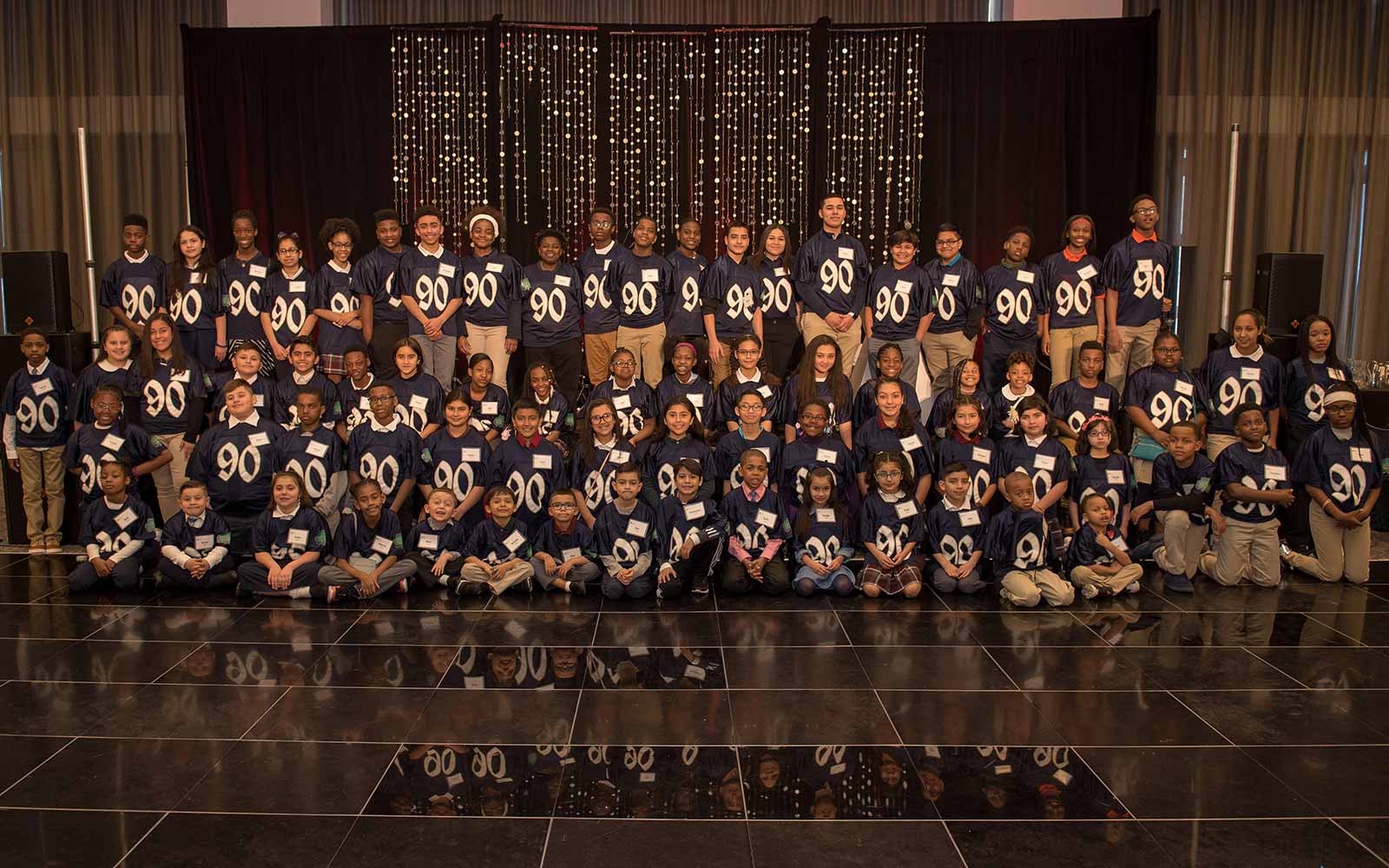 The 90 students of Declan’s Class, a group of Horizons for Youth students whose tuition and programming are funded through donations in Declan Sullivan’s name.

That didn’t stop the growth. Declan’s 40 became Declan’s 52 and then Declan’s 65, all the way until this year, when it’s Declan’s 90, with 96 students expected by next spring. For now, that’s 90 students who work with tutors, who graduate high school, who apply to college and seek scholarships and now have a better chance. Many will become the first in their respective families to attend college. To date, the Sullivans have raised more than $4.7 million. Their friends volunteer, as do Declan’s.

Next year, two members of the original class will be the first students assisted by the Sullivans to graduate high school and attend college. Their first names are Dejah and Sophia (the school, per its policy, does not provide last names). Both started at Horizons in elementary school. Both received tutoring for their high school classes. Both worked for Horizons; Sophia as a photographer, Dejah as an office intern. And both plan to attend college. Last summer, Horizons helped them research the best schools to fit what they might study. Now, they’re working on their college applications, which they will finish by Halloween. From then until June, they’ll apply for scholarships and financial aid. “If not for the Sullivans,” George says, “neither Dejah or Sophia would be positioned like that.” 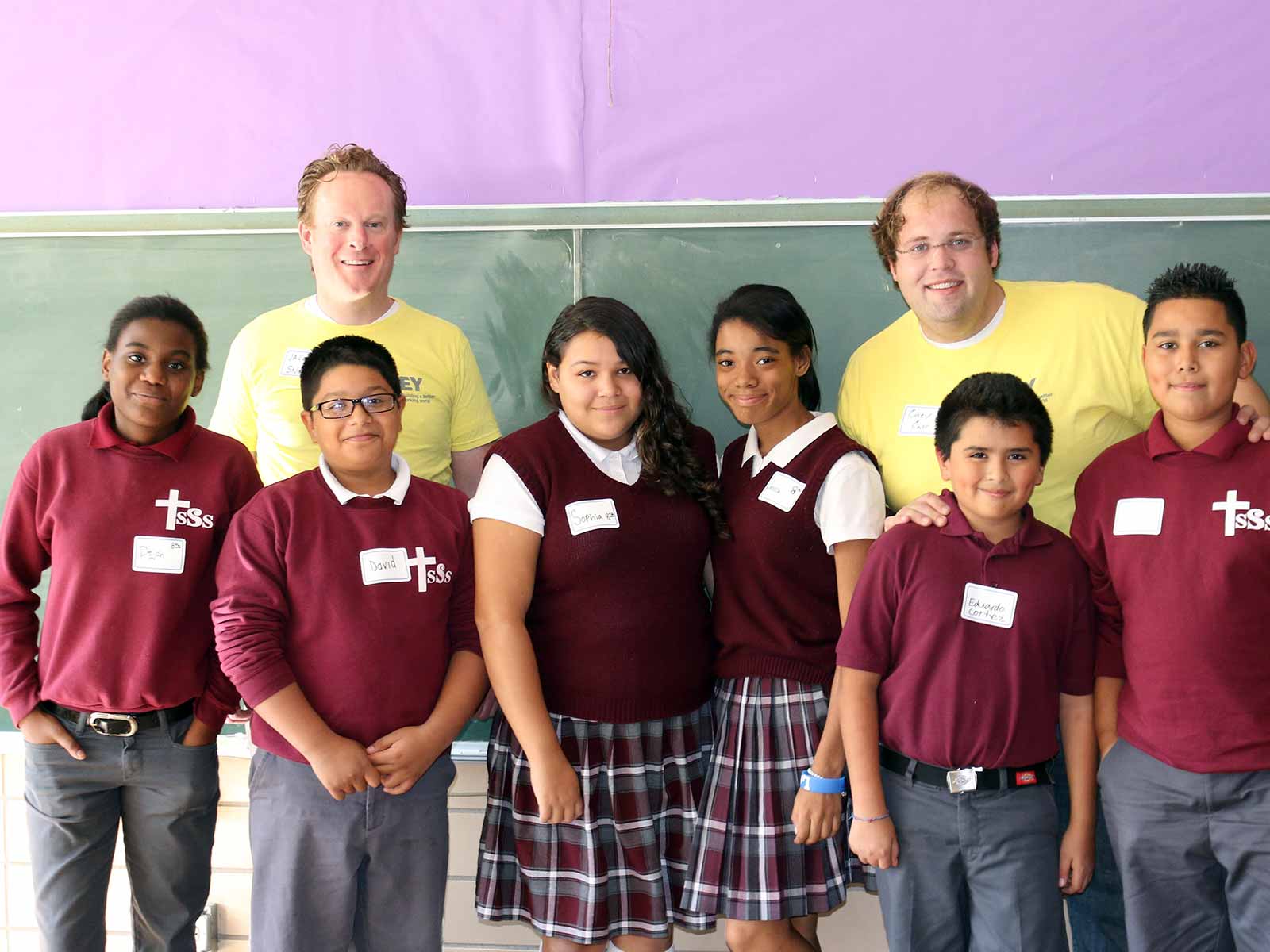 Dejah (far left) and Sophia (third from left), who both were members of the first ‘class’ of Horizons for Youth students that were assisted by the Sullivans, are applying to college this fall.

As for the family, back when we did the first story, their daughter, Gwyneth, who goes by Wyn, was in school at Notre Dame. Their other son, Macartan or Mac, had recently submitted his application there. Now, Wyn is in her fourth year of medical school. She wants to be a surgeon. Both graduated from Notre Dame. Mac works as a construction manager, and, for now, all four Sullivans live in the Chicago area.

They also all have worked or volunteered at Horizons, keeping Declan’s name alive, honoring his life. They still attend Notre Dame football games, still root for the Fighting Irish. The remain resolved to grow Declan’s class as large as they can. “A Declan’s 500?” Barry asks, before answering his own question.

“By all means,” he says, knowing his family has turned an unimaginable tragedy into real and lasting change.

“Do you need anyone to edit the personal essays for those college applications?” I find myself asking, swayed by the Sullivan effect.

“We’re going to keep growing,” Barry says. “We need all the help we can get.”