Vanderbilt running back Ke’Shawn Vaughn (5) runs in a touchdown against Nevada during the second half at Vanderbilt University in Nashville, Tenn., Saturday, Sept. 8, 2018.(Photo: Andrew Nelles / Tennessean.com)

Derek Mason was jogging with his Vanderbilt team to the locker room after Saturday’s 41-10 rout of Nevada when he stopped, found a TV camera and peered into it with a menacing look.

“You’re next, Notre Dame!” Mason growled, and at that moment my little sports media fantasy ended and I snapped back to reality at his mundane-by-comparison press conference.

Mason would never say such a thing, at least not for public consumption, and presumably his players will be careful and respectful this week as the 2-0 Commodores prepare for another program opportunity. It’s hard to think of the upcoming trip to play the No. 8 Fighting Irish without thinking of the 3-0 Commodores last season, soaring into an opportunity against Alabama and crawling away from it after a 59-0 loss.

And it’s hard to think of that without thinking of then-Vanderbilt senior defensive tackle Nifae Lealao, seconds after an impressive 14-7 win over Kansas State, saying into a WSMV-TV camera: “You’re next, Alabama!” 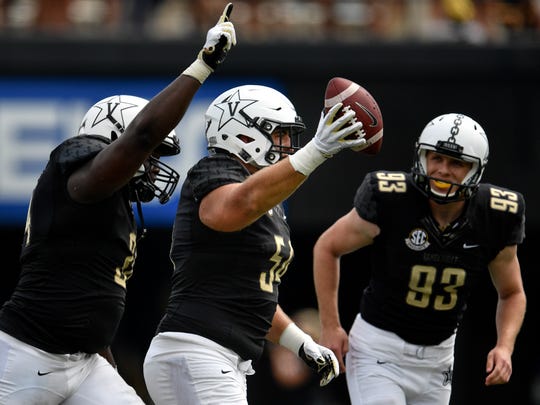 It’s hard to be too hard on Lealao for that, by the way, though #AlabamaTwitter and others had their fun with him. This is college football. The emotions are high and the players are so large you can forget how young they are.

That Kansas State win was its own program moment, as good as any in Mason’s tenure, and those words reflected a program that puffed up a bit too much for Alabama — then spent weeks trying to recover from the resulting trash-can stuffing.

So here we are again, a Vanderbilt team that looks fast and confident, with a quarterback who can look as good as anyone in college football when he gets rolling. Going up against a blueblood. And I have to admit, it’s hard to resist … thinking … the Commodores … might … maybe … have a chance to shock Notre Dame, there I said it (and now I’m covering my face with my hands and peering out between my fingers to see who’s laughing at me).

Can Vandy hang in up front vs. Irish? 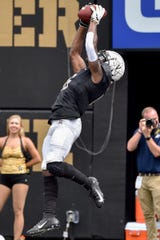 Vanderbilt wide receiver Kalija Lipscomb (16) receives a pass for a touchdown against Nevada during the second half at Vanderbilt University in Nashville, Tenn., Saturday, Sept. 8, 2018. (Photo: Andrew Nelles / Tennessean.com)

A good chance? Nah. Notre Dame looked great in its season-opening win against Michigan, quarterback Brandon Wimbush connecting downfield in ways he rarely did last season. The Fighting Irish are loaded with talent as usual, and Notre Dame Stadium can be an imposing environment — though more because of its mystique than its actual noise level.

A chance? Sure. These Vanderbilt players have actually seen several rowdier places in their own conference. And they’ve seen several better teams. Notre Dame sure isn’t Alabama. In sports media fawning received, yes, but not in actual quality.

But the Commodores must be able to hang in there and stop the run to some extent, and run the ball with some success, and get creative and hang around and make the hosts feel that mounting pressure. And receive an epic day from Kyle Shurmur and a 2017-ish day from Wimbush.

I like what I’ve seen so far from Vanderbilt other than some red-zone gaffes. On Saturday, Shurmur was outstanding, 23-for-32 for 258 yards and two scores. He has special chemistry with receiver Kalija Lipscomb (10 catches, 85 yards, two touchdowns) and tight end Jared Pinkney (four catches, 98 yards). He has a new weapon in Illinois transfer running back Ke’Shawn Vaughn, who started and then finished with 11 carries for 93 yards and two scores — one of them a 46-yard cannon shot.

“He flashed, he showed why he’s the back we thought he is,” Mason said of Vaughn, a Pearl-Cohn product who had dozens of family members in the stands and has terrific backfield cohorts in Khari Blasingame and Jamauri Wakefield.

Vandy senior linebacker Josh Smith was as good as any player on the field Saturday. The addition of Jason Tarver as defensive coordinator and play caller looks good so far. Nevada came in off a 72-point output against Portland State, but the Commodores made the Wolf Pack one-dimensional and punchless.

Junior cornerback Joejuan Williams had the prettiest of four forced turnovers for Vandy, a diving catch out of a zone coverage for his first career pick. Although he lamented that his sprint-to-the-sideline celebration was “trash,” that is not an apt description of Vanderbilt’s back seven through two games.

The Commodores have the high-tempo, dink-and-dunk offenses figured out. That isn’t as easy as they’ve have made it look. It’s also not the same as taking on a team that can bully you and force you to bring more bodies close to the line of scrimmage, then hit you downfield from there.

We’ll see if Vanderbilt can handle that, and all other aspects of the opportunity at hand. Mason did have a real quote Saturday about Notre Dame, saying: “They’re well-coached and I’ve got a lot of respect for who Notre Dame football is. Irish football is back. We’ve got to be worried about us … get ready to go to South Bend and give Notre Dame all we can.”

It’s easy to daydream, isn’t it?