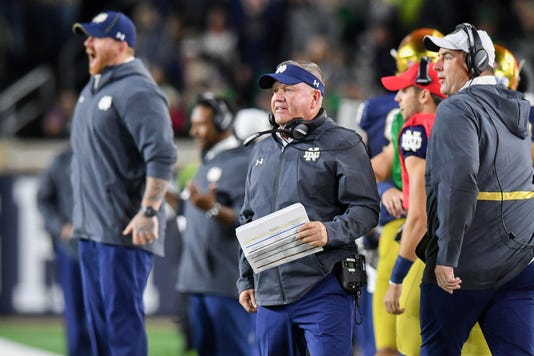 After defeating Stanford on Saturday, Notre Dame head coach Brian Kelly and his Fighting Irish seem to have a fairly easy path to the College Football Playoff. But is it too easy?(Photo: Matt Cashore/USA TODAY Sports)

Unbiased observers might reference Moses rather than Sir Edmund Hillary after the Fighting Irish delivered a 38-17 thumping to modern nemesis Stanford. Having wrested away the No. 7 national ranking from the Cardinal, Notre Dame (5-0) suddenly seems to have a clear, dry path through a parted Red Sea to the College Football Playoff on the distant opposite shore.

“Notre Dame has to be considered a serious playoff contender,” bowl expert Jerry Palm wrote in his weekly column for CBS Sports.

Although Palm, a Purdue graduate and Indiana resident, currently projects Notre Dame for a Dec. 29 date with LSU in the Peach Bowl, he sees a remaining schedule with nary a dangerous roadblock until perhaps the regular-season finale at USC on Nov. 24.

Even Saturday night’s assignment against No. 23 Virginia Tech at raucous Lane Stadium in Blacksburg, Va., seems mild by comparison.

“I don’t even know if this qualifies as a ‘big one’ because this (Hokies) team lost to Old Dominion two weeks ago,” Palm said. “They came back and beat Duke but their starting quarterback is out.”

A healthy Josh Jackson might cause Palm to predict a Hokies upset, but instead it’s Kansas transfer Ryan Willis who must face an Irish defense that held Stanford to two first downs and 31 total yards in the second half.

“I think their defense can allow them to hang around, maybe make a game of it,” Palm said of Virginia Tech. “But I just don’t have enough faith in that offense to actually pull off the win.”

Notre Dame looks like a different team with Ian Book under center. He helped lead No. 8 Notre Dame to an impressive win over Stanford on Saturday.
Mike Berardino, IndyStar

“I think the best chance for them to get beat is USC at the end of the year,” Palm said. “That’s a big rivalry game. That’s a three time-zone road trip. Their freshman quarterback (JT Daniels) will have played an entire season by then, assuming he stays healthy.  That would seem to be more likely of a loss at this point. Anybody else would be a major upset.”

Should the Irish run the table and present the 13-member College Football Playoff Selection committee with an undefeated resume, their spot in the four-team playoff would seem relatively safe. Should they enter December with one loss, however, or somehow find themselves in a quintet of undefeated teams, that’s where the lack of remaining heft on their schedule could prove problematic.

“If they’re in a situation where they’re 11-1, obviously who beat them matters,” Palm said. “But Stanford and Michigan are the only two teams they’ve played so far that are (ranked) in the polls. It doesn’t look like Virginia Tech is going to end up in the polls anyway. Unless this is Notre Dame’s loss, (Virginia Tech) is unlikely to finish the season there.”

Even those wins over the Cardinal and the Wolverines could lose some luster over the next two months should tougher schedules for Stanford and Michigan add to their loss totals.

“Is USC going to end up getting ranked at some point?” Palm said. “Who else on this schedule is going to be noteworthy, really? Michigan still has a lot of tough teams ahead of them. Stanford does too.

“It could be the best team (the Irish) play ends up 9-3. If you’re 11-1, is that really going to be good enough in a competitive situation with other teams?”

And while recent college football history suggests a five-unbeaten slugfest isn’t going to have the committee calling room service for extra ibuprofen, a potential doomsday scenario exists there as well. Perhaps that was another reason Kelly piled on the praise Tuesday for former Hokies coach Frank Beamer, the newly elected College Football Hall of Famer who also holds a spot on the selection committee.

“If there’s five of them, then, yeah, you have to leave somebody out,” Palm said. “Then Notre Dame could be a team in trouble in that situation, but it really depends on who you’re being compared to. Who’s the competition? Who are the undefeated teams left?

The receiver made big plays in the Fighting Irish’s win over the Cardinal.
Mike Berardino, IndyStar