It’s been four days since the DePaul Blue Demons (4-1) slumbered through the second half against the Notre Dame Fighting Irish, and for most of their game Wednesday night against the Cleveland State Vikings (2-6) it looked like they were still sleeping.

In an 83-73 win, the second half hangover against Notre Dame carried over as it took everything the Blue Demons had to shake a feisty Vikings squad that came in with a 2-5 record and were 310th out of 353 teams in the Ken Pomeroy rankings.

“The threat of not winning will make you do things late in the game and as a result our communication picked up, our switches were better, and we were bringing it to the basket more than we had the first 30 minutes,” Blue Demon head coach Dave Leitao said after the game. “But, our energy could be better through the course of 40 minutes.”

“It [the energy level] definitely could have been better defensively,” Blue Demon guard Jalen Coleman-Lands added. “We could definitely talk more, definitely could do something to prevent a lot of 3-point shots. We could have done better, so we need to go back to the drawing board and make some adjustments.”

DePaul senior guard Eli Cain’s acrobatic three-point play on a driving reverse layup from the left side put the Blue Demons up 75-68 with 2:30 left in the game, part of a 6-0 run in the final couple minutes that would give the Blue Demons enough of a cushion to escape with a victory.

But for a little bit, it appeared like the six-point cushion still wouldn’t be enough. After a layup from Vikings sophomore guard Tyree Appleby (team-high 15 points) and then a turnover by Blue Demon big man Femi Olujobi on the ensuing inbounds play, the Vikings turned the ball over on their own inbounds pass to spoil an opportunity to cut into a four point lead with 51 seconds remaining. On the next two possessions, Coleman-Lands calmly sank four free-throw attempts to allow the Blue Demons to escape with a victory. The Blue Demon defense buckled down the last couple minutes of the game.

“It’s just the group of guys we have in the locker room, we didn’t want to lose that game, we knew we couldn’t lose that game,” Cain said. “I think we all took it upon ourselves individually and collectively to get those critical stops down the stretch.” 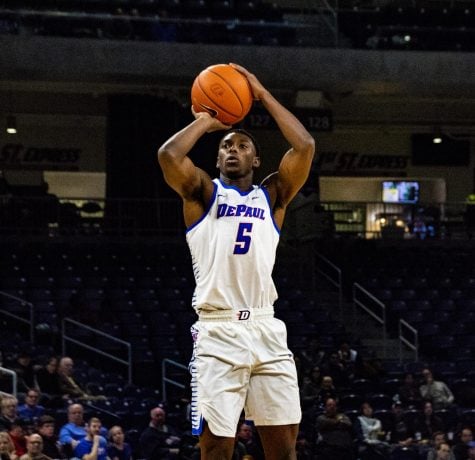 A sizzling percentage from behind the 3-point line kept the Vikings more than competitive through the duration of this one. The Vikings sunk 13 3-point field goals (tied for a season high), 11 of which came in the first half as the Blue Demons didn’t have an answer for the Vikings barrage from 3-point land (41.9 percent for the game).

“If we go back to the end of the Penn State game there were five seconds to go and a Penn State player ran to the weak-side corner and got the ball ready to shoot and Max went and chased him off the shot,” Leitao said. “That same kind of intensity has to happen when we close out shooters and we haven’t gotten that message because the season started off with us not having to do it the first few games, the first two at least. So we need to get into a better groove of closing out shooters.”

While the Vikings stroked it from 3-point land, the Blue Demons dominated the paint.

Similar to the game against Penn State two weeks ago, Blue Demon big men Olujobi and Paul Reed were the first two players off the bench. It’s been a combination that has provided a jolt for the Blue Demons all season.

“They’re very effective offensive players individually,” Leitao said. “When they come off the bench, although the scouting report talks about it, it’s not the same kind of expectation from another team that they are just going to immediately come off the bench and contribute. The combination of the two [makes them effective] and I need to figure out how to have that continue throughout the course of the game.”

Reed produced six quick points off the bench and one block when Leitao subbed him in the first time. Olujobi took a bit longer to warm up (the referees called him for two traveling violations during his first chunk of playing time in this game), but finished the game with 11 points on 4-for-5 from the field. The Blue Demons won the rebounding battle 40-30 tonight and Reed, Olujobi, and sophomore big man Jaylen Butz shot a combined 14-for-21 from the field for 32 points.

The Blue Demons battle their third Mid-Eastern Athletic Conference foe of the season when they square off against Florida A&M Monday at Wintrust Arena at 7:30 p.m.