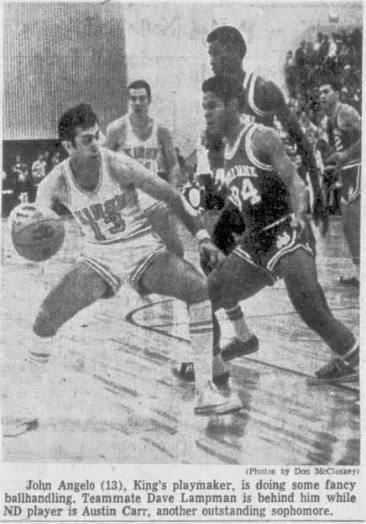 To call it a sellout would be an understatement.

More than 4,000 people packed into the newly opened $2.2 million King’s College gymnasium the night of Dec. 3, 1968 for a basketball game.

Not just any basketball game.

King’s College hosted the fifth rank University of Notre Dame to open up the season for the two schools.

Cost of each ticket to watch the Monarchs and Fighting Irish play: $3.50.

The first ticket was given to Bishop J. Carroll McCormick on Nov. 8, 1968. King’s students and faculty received tickets on Nov. 12 and Nov. 13, and tickets were available to the public on Nov. 22.

“Athletic Director Ed Donohue of King’s College announced the King’s – Notre Dame basketball game Dec. 3 in the new King’s gym on North Main Street is a sellout. A limited number of game tickets went on sale this morning to the public and within 40 minutes were all sold. King’s probably could have sold 10,000 tickets to the game had space been available,” the Times Leader Evening News reported Nov. 22, 1968.

The gymnasium now called the Scandlon Physical Education Center was dedicated by McCormick on Dec. 1, 1968.

“First game in the gym will be played when the nationally fifth ranked University of Notre Dame Fighting Irish come to this city to play the Monarchs in the opening game on the schedule for both teams. Facilities of the new gym are among the finest of any basketball court in eastern Pennsylvania” the Evening News reported Nov. 21, 1968.

The match up against Notre Dame was also the first for Donohue, who took over as head coach for King’s earlier in the year.

Notre Dame arrived in Wilkes-Barre on a chartered plane Dec. 2, 1968, and were transported by bus to the Hotel Sterling where they stayed. Shortly after arriving at the hotel, they walked several blocks to the King’s gym for practice, the Evening News reported Dec. 2, 1968.

After practice, the two teams gathered for a buffet dinner on King’s campus.

“Notre Dame emerged victorius, 84-54, but not before mixing it with a fired-up King’s team that thrilled the assemblage in the early part of the contest matching the Irish basket for basket,” the Evening News reported.

King’s never had the lead in the game but came close with a 19-18 gap well into the first half until Notre Dame pulled ahead.

After the game, the Notre Dame Alumni Club of Wilkes-Barre hosted a reception and dinner for the Irish players at Hotel Sterling.

On the same court prior to the main matchup, Luzerne County Community College defeated the King’s College freshman team 79-65.

The game in Wilkes-Barre wasn’t the first between King’s College and Notre Dame.