11 Former Notre Dame Players are in the Playoffs 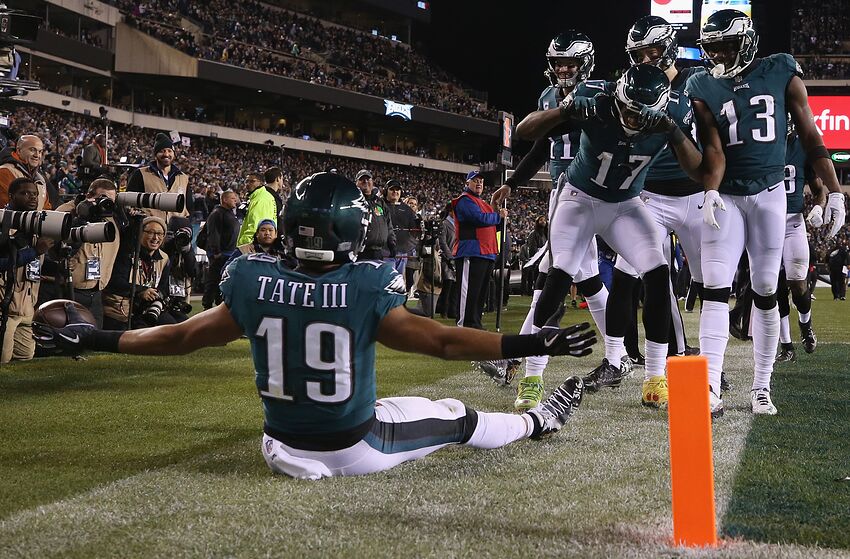 PHILADELPHIA, PA – DECEMBER 03: Wide receiver Golden Tate #19 of the Philadelphia Eagles celebrates with teammates after making a catch for a 2-point conversion against the Washington Redskins during the fourth quarter at Lincoln Financial Field on December 3, 2018 in Philadelphia, Pennsylvania. (Photo by Mitchell Leff/Getty Images)

Notre Dame fans have a nearly dozen reasons to watch the NFL Playoffs.

The NFL Playoffs start this coming weekend, and your Notre Dame Fighting Irish will be well-represented.

In all, 11 former Irish players will be on the active rosters of teams that qualified for the NFL’s postseason tournament. They are as follows:

The Eagles will face the Chicago Bears on Sunday, January 6th at 4:40 pm ET on NBC. Tate and Adams are both expected to start.

The Colts will travel to Houston to face the Texans on Saturday, January 5th at 4:35 pm ET on ESPN & ABC. Nelson and Farley are both expected to start.

Martin should start at center for the Texans when they host the Colts this weekend.

The Chargers will travel to Baltimore to face the Ravens on Sunday, January 6th at 1:05 pm ET on CBS. Rochell will get playing time in the defensive line rotation for the Chargers.

Stanley is expected to start at left tackle when the Ravens host the Chargers.

The Cowboys will host the Seattle Seahawks on Saturday, January 5th at 8:15 pm ET on FOX. Smith and Martin will both start. Martin missed the last two weekends of the season as he nursed a knee injury.

The Rams have a bye this weekend as the No. 2 seed in the NFC. Sullivan will start at center in the Divisional Round.

The Saints have a bye this weekend as the No. 1 seed in the NFC. Te’o should see some reps during the Divisional Round.